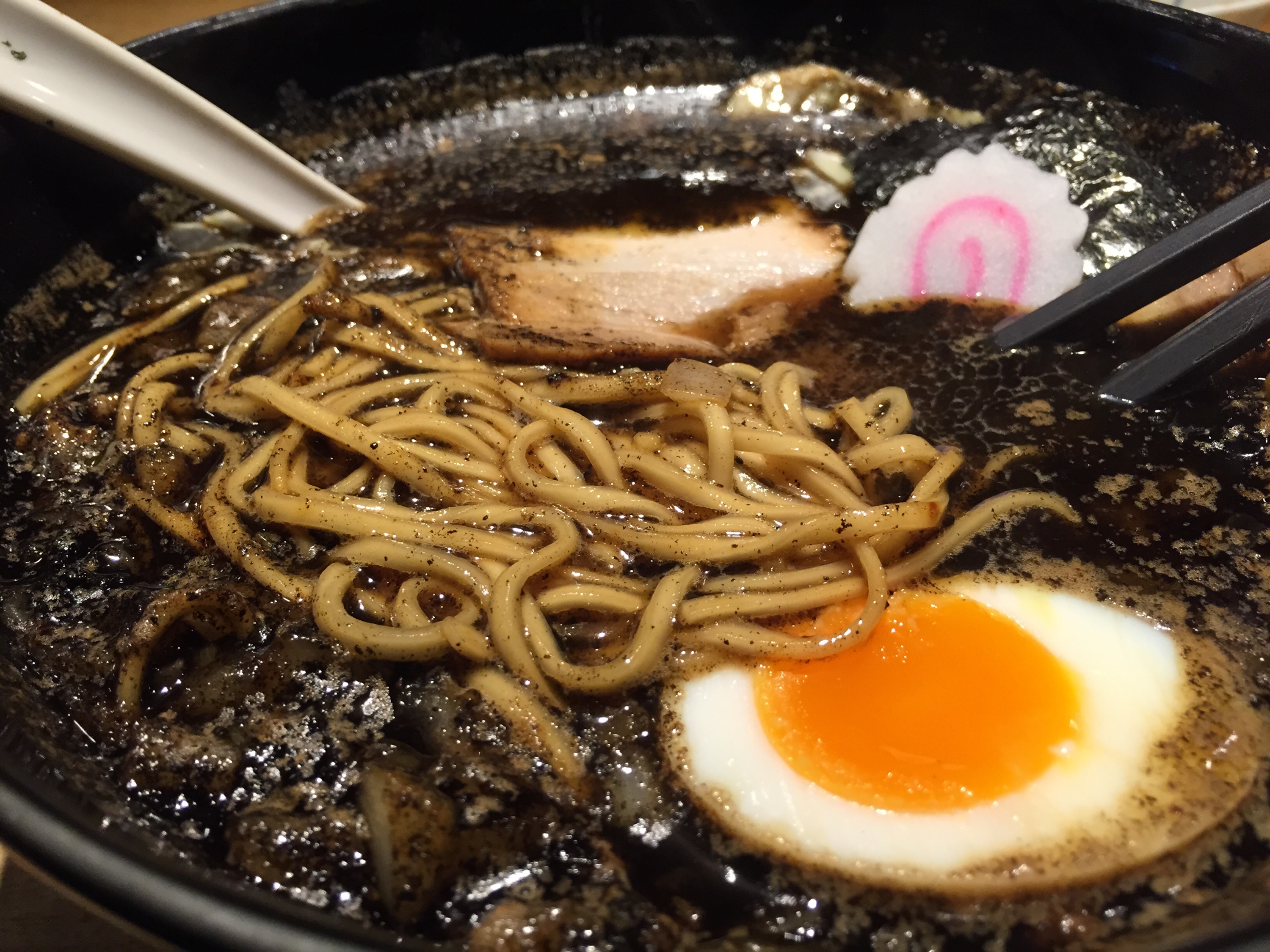 So, the origin of ramen has always been unclear… Is it Chinese? Or Japanese? I don’t think we will ever know… 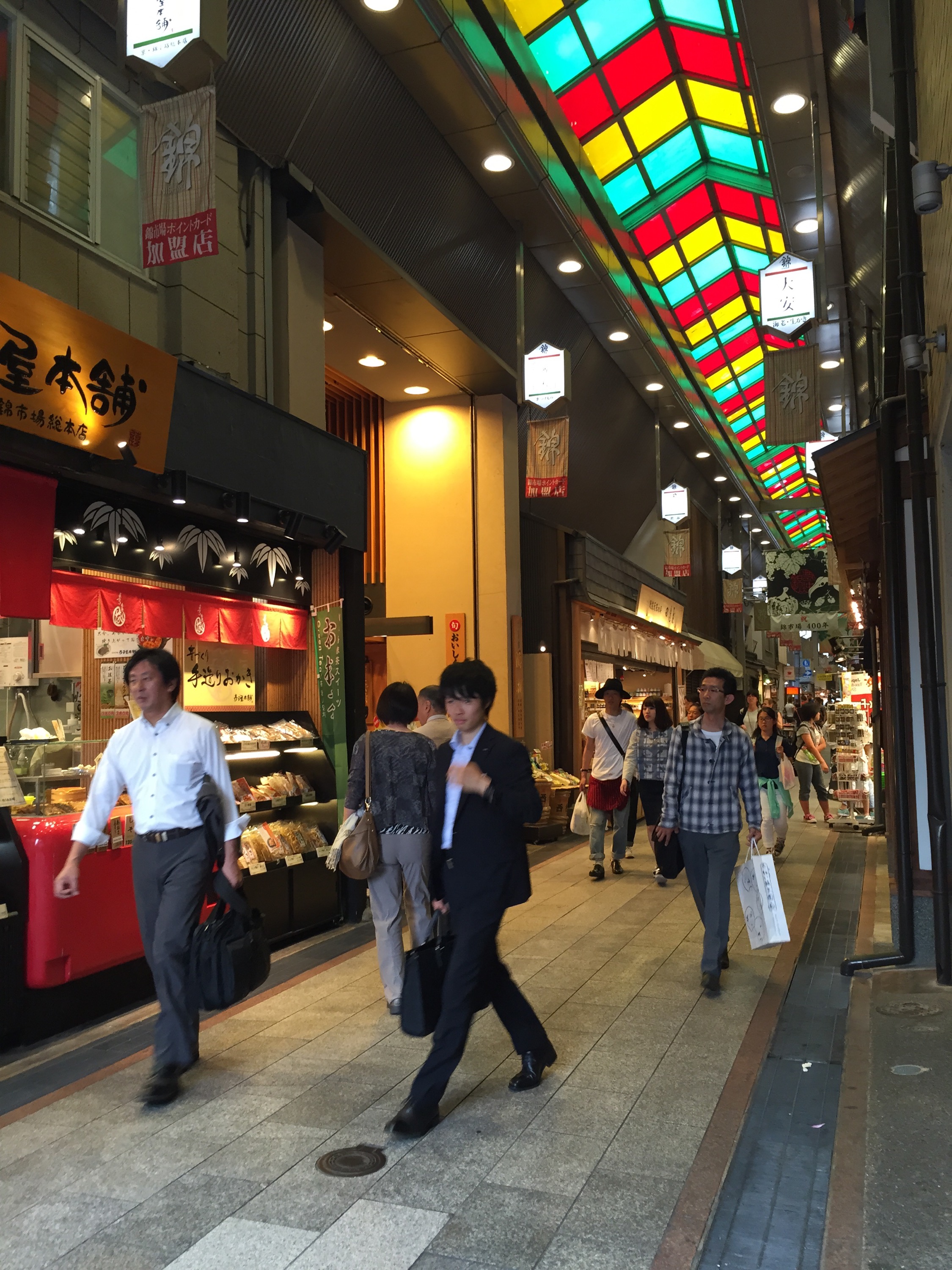 But seeing that ramen is one of my go to foods in the states and it’s usually dirt cheap, we decided to go to Kyoto Gogyo for dinner – a well recommended place by the Nishiki Market.  (Side note: Nishiki Market is celebrating their 400 year anniversary!!) We arrived about half hour after the restaurant opened for the night as I read that the later you go the longer you wait. And it’s definitely a plus that it’s walking distance from our hotel. 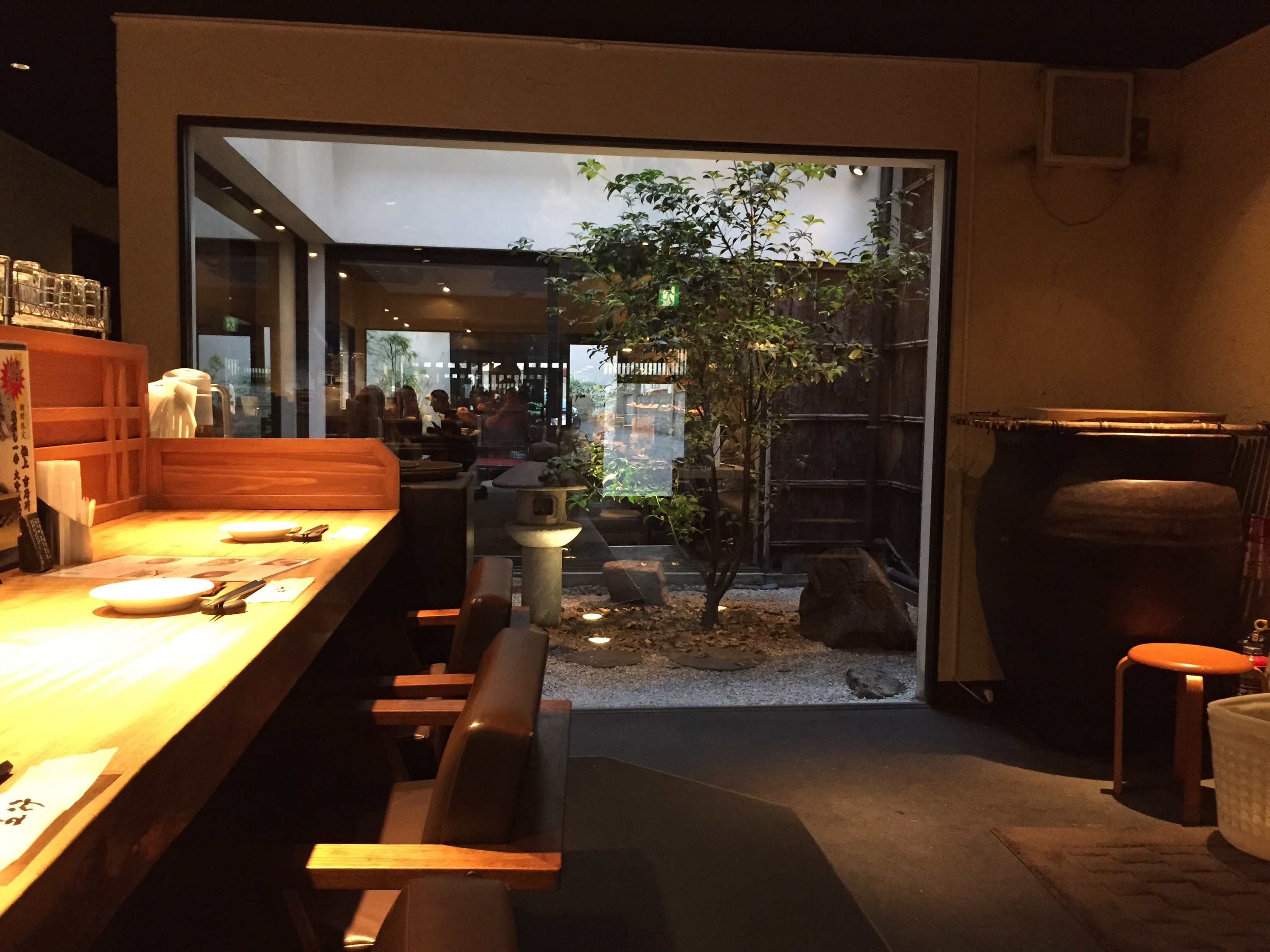 The restaurant is pretty modern – clean lines with a semi-live edge bar next to the open kitchen. But apparently its location comes with an interesting history. 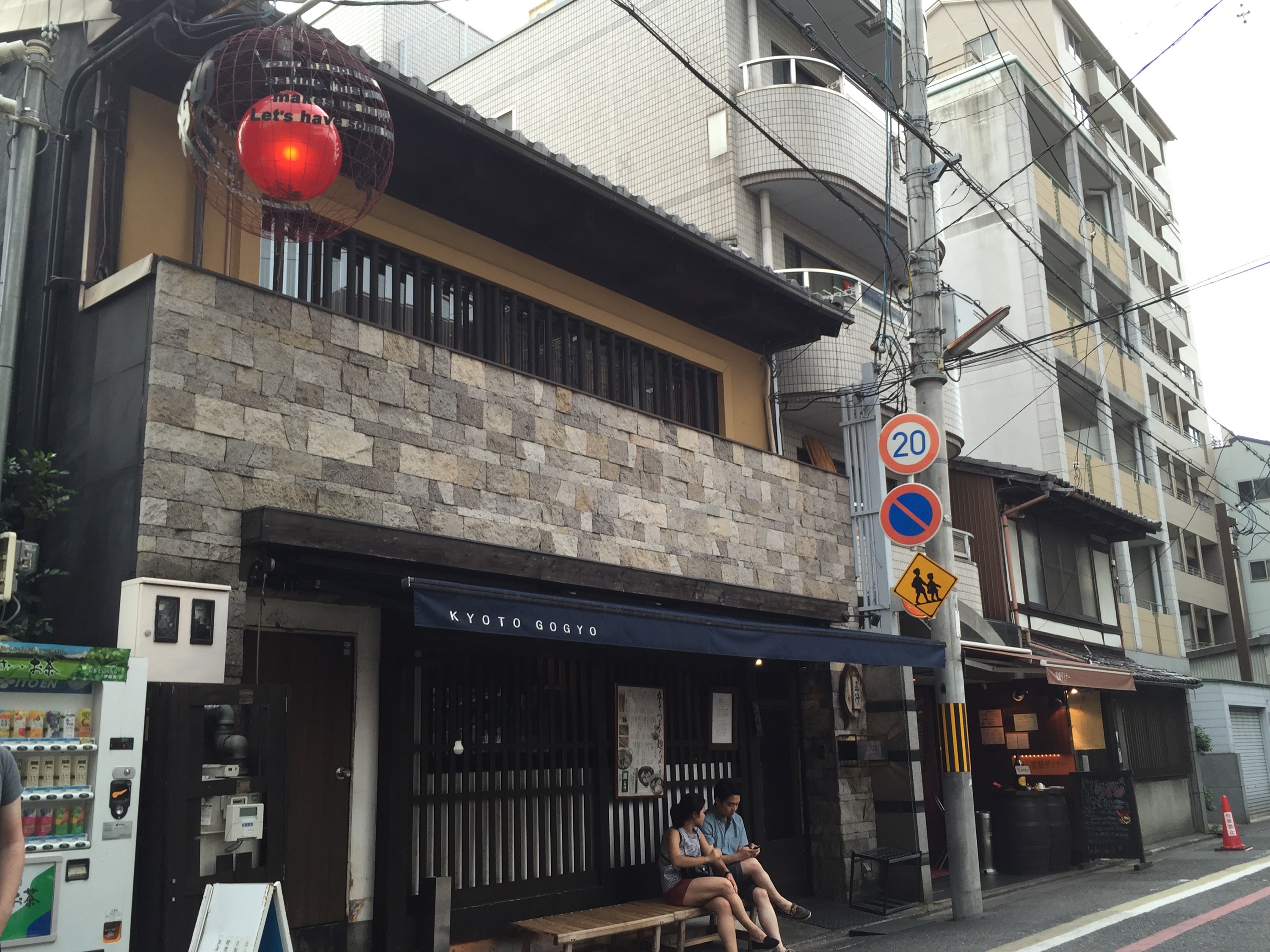 Gogyo sits in what was once the former home of a Gion geisha named O-Yuki. She met George Morgan, the nephew of JP Morgan. He was so captivated by O-Yuki that he proposed to her multiple times over two years and she said no every time.  Her heart belonged to someone else.  Jokingly, she told Morgan she would marry him if he gave her ¥400,000. He said done…. So O-Yuki kept her promise, gave the money to her love and left Kyoto to marry Morgan. After Morgan’s death, she returned to Kyoto and lived here in this house with her sister.

Anywho, why am I talking history when this blog is about food?! On to the orders!! 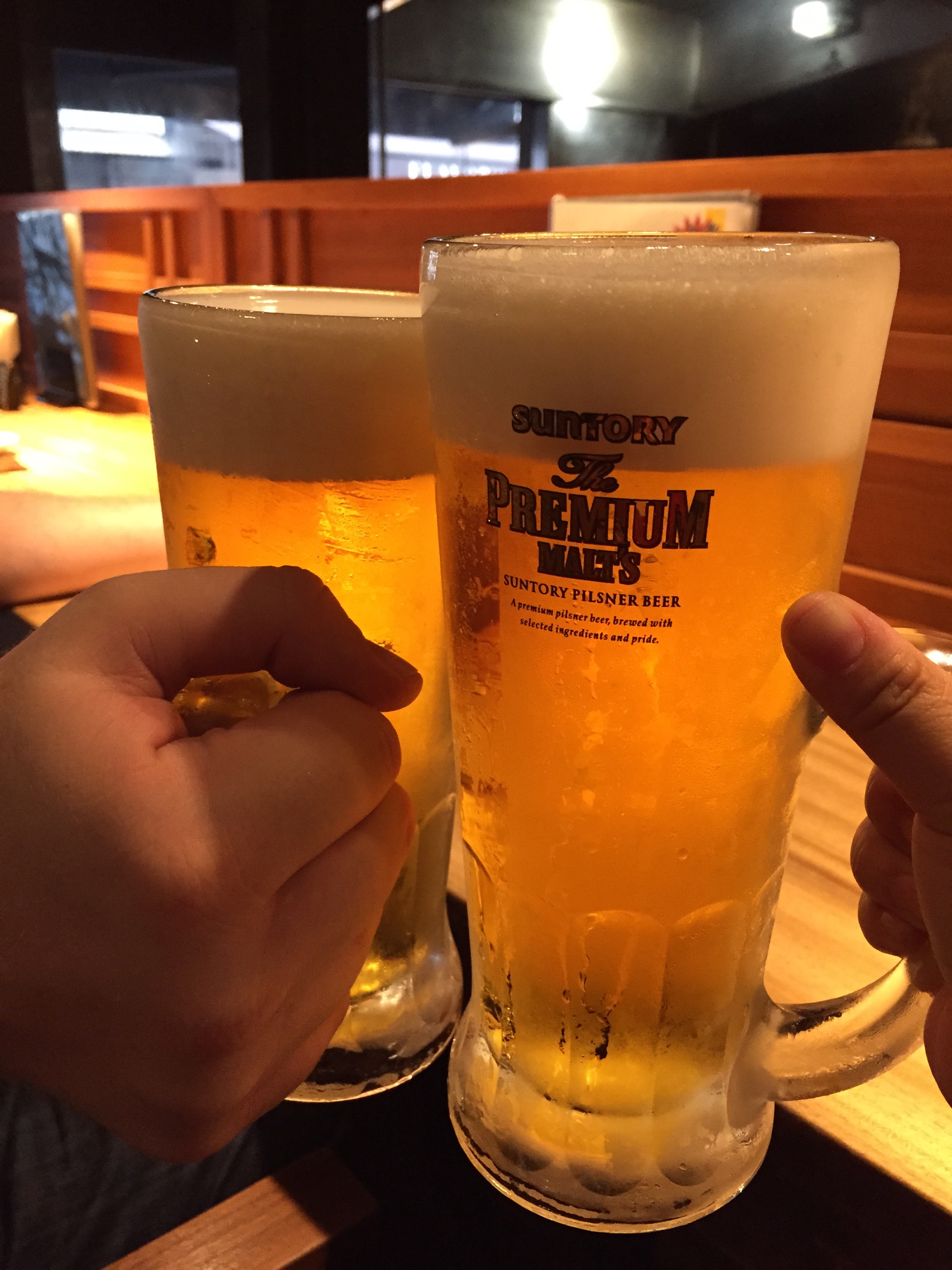 Staff didn’t speak English well so it was a point and nod place.  Somehow the big beer we each got added up to equal to drinking a pitcher between the two of us. 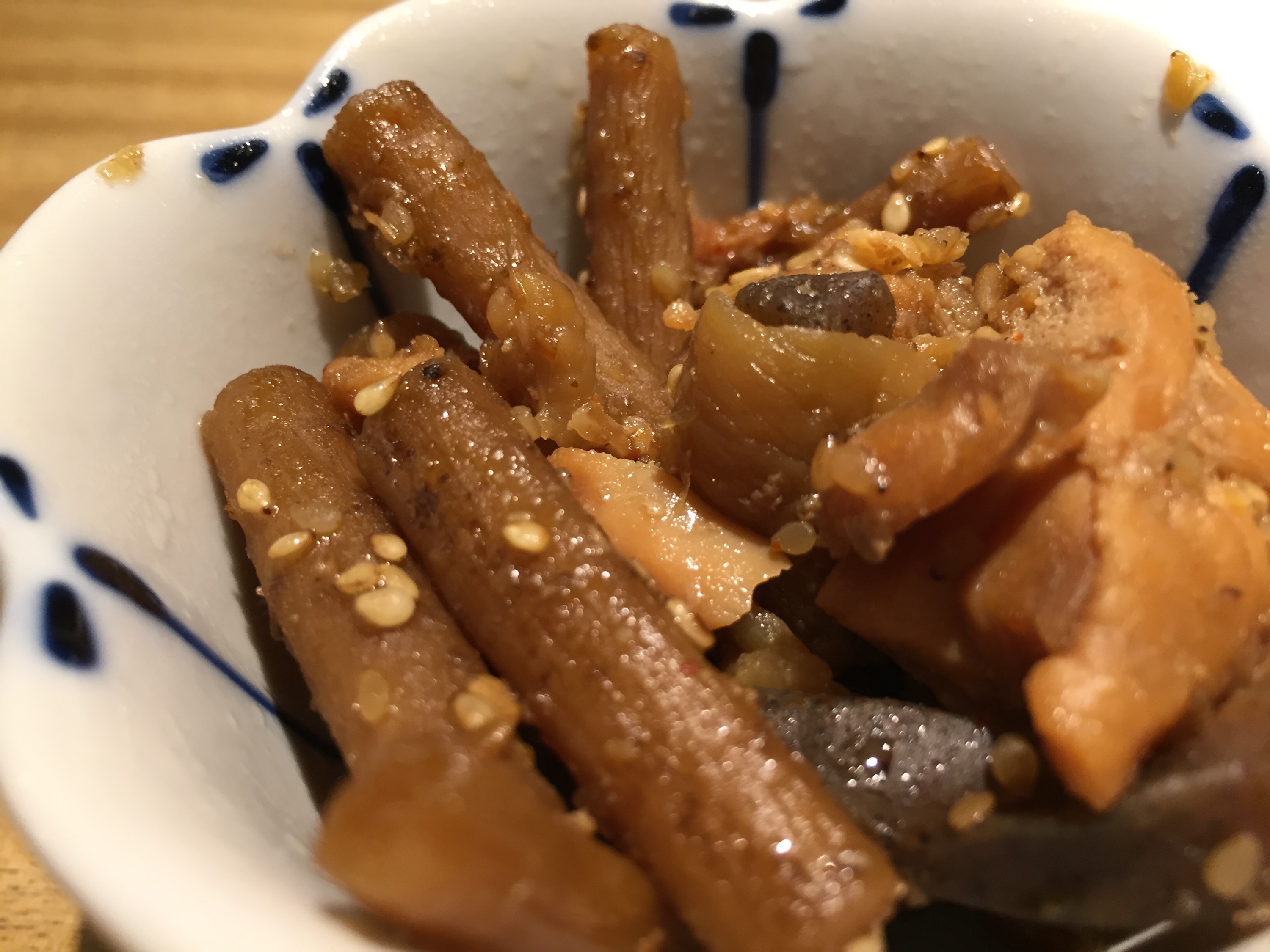 Apparent we were also required to get appetizers. It was some chicken dish with some vegetables on the side.  It was either this or “tomato with beans” which sounded disgusting.  I later found out the beans were edamame… But I’m not sure if I would have changed my choice even knowing what it was… 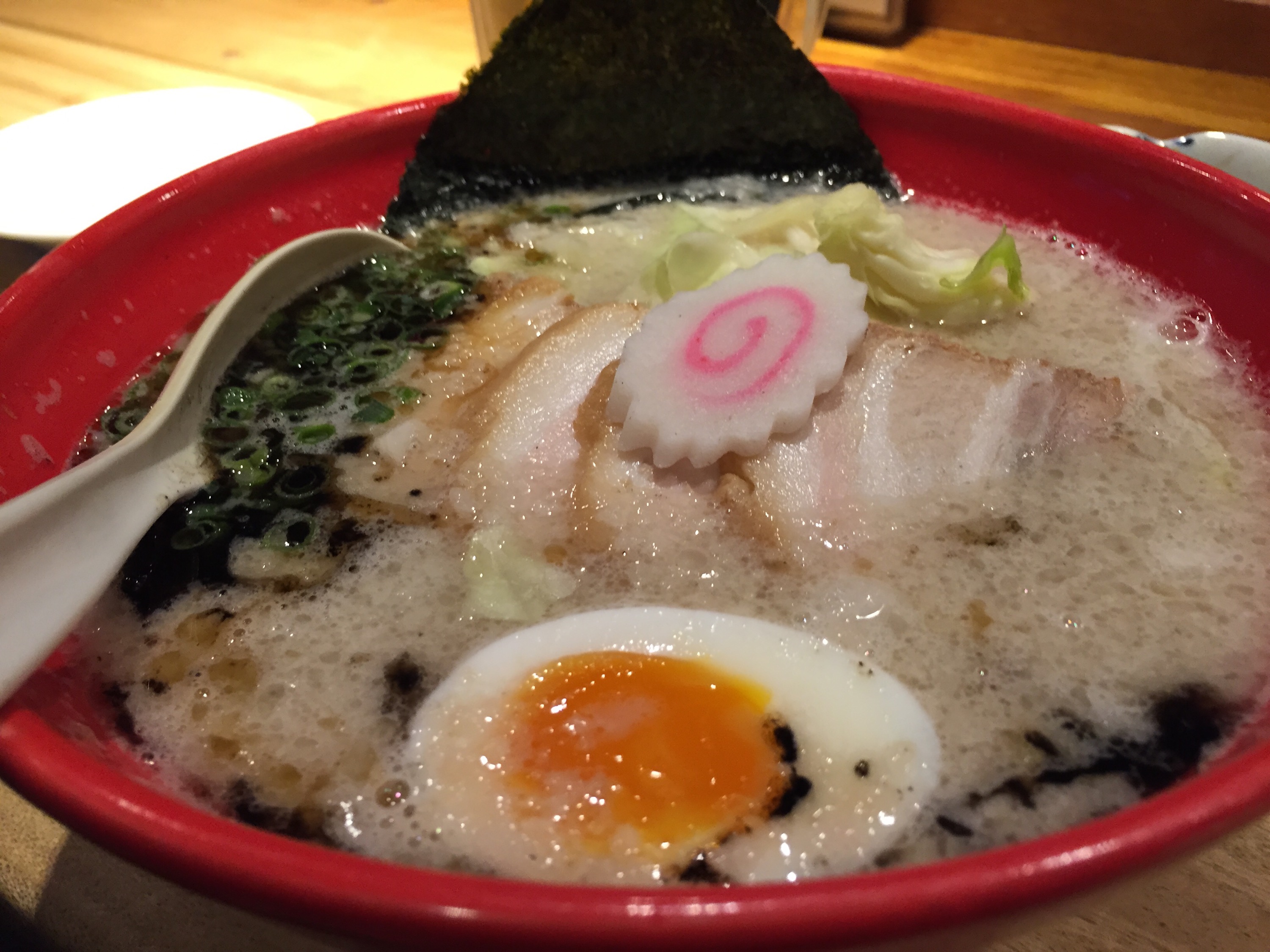 For the main event, Anthony ordered the tonkotsu char siu ramen.  It had thicker noodles with a rich garlicky pork based broth. But we think Jonathan Gold’s recommended Tsujita Annex in West LA is still better. 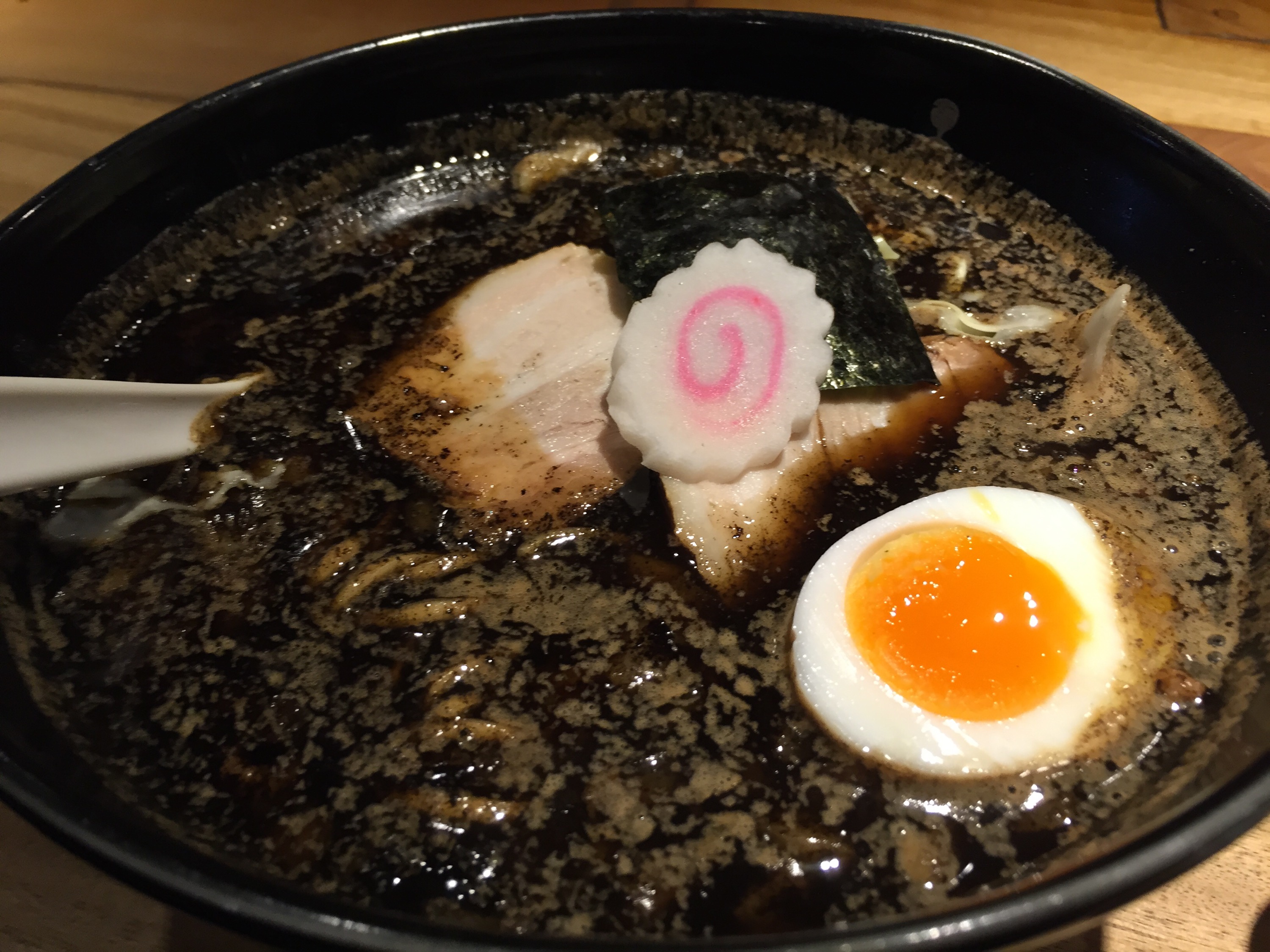 I was a bit skeptical about the kogashi ramen – which they translated to “burnt”. But since that’s what they were known for, I had to try it.  I chose the miso version over the shoyu due to various comments that the shoyu was too burnt/salty/oily/etc.

So going back to the debate of origin of ramen, I think this particular kogashi miso ramen tasted as if Korean BBQ had joined the party. 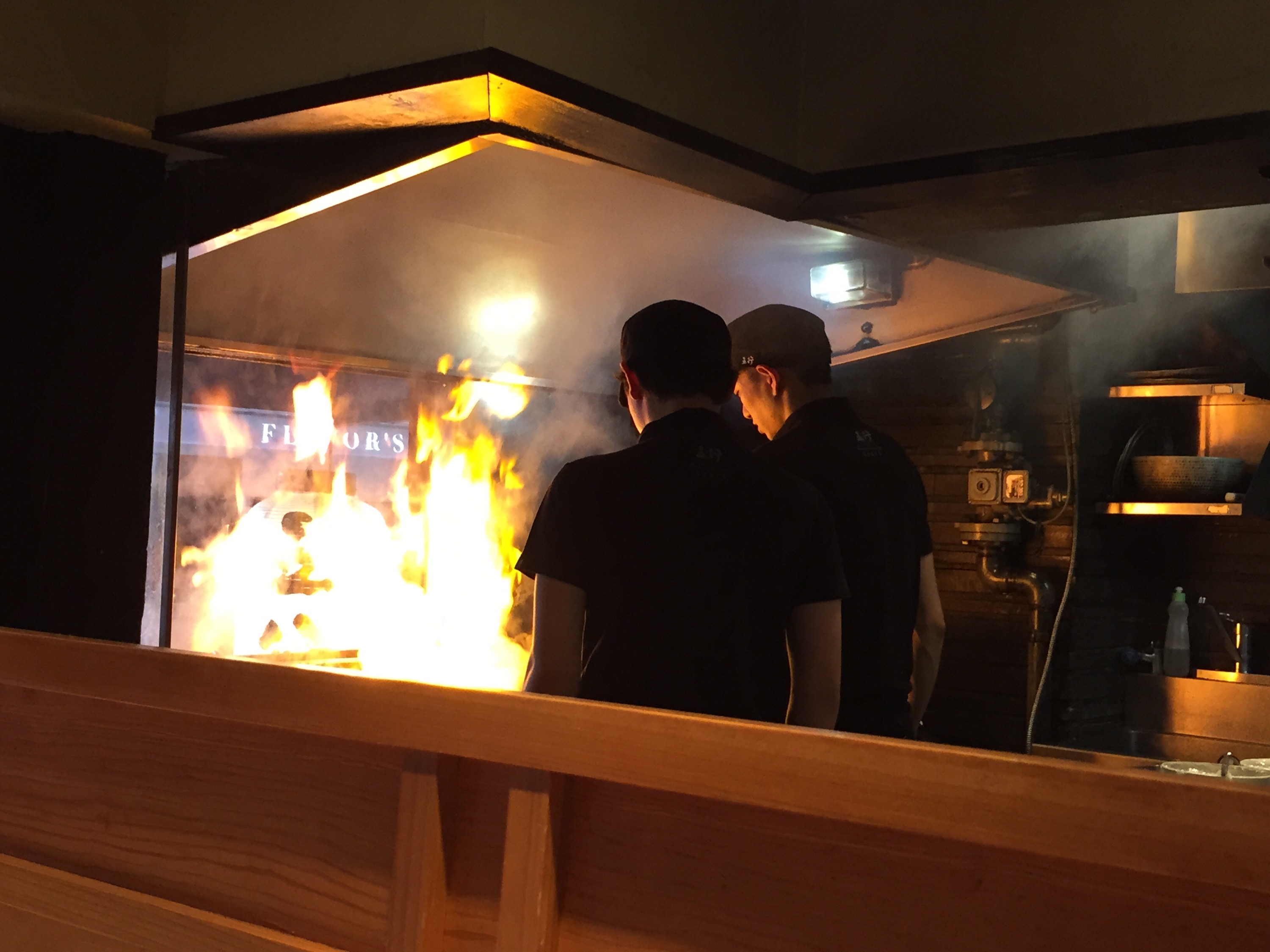 The miso broth is so flavorful, super dark/almost black and infused with the smell and taste of Korean BBQ. And to get that smoky umami flavor, for each bowl of charred (closer than burnt) ramen, a couple of ladlefuls of lard and broth are heated up in a wok and then ignited, filling the kitchen with a giant flash of fire and then smoke permeated the air, hair and clothes, just like KBBQ.  Clarification: only the broth is smoked, the noodles, egg and meat are cooked like normal ramen. 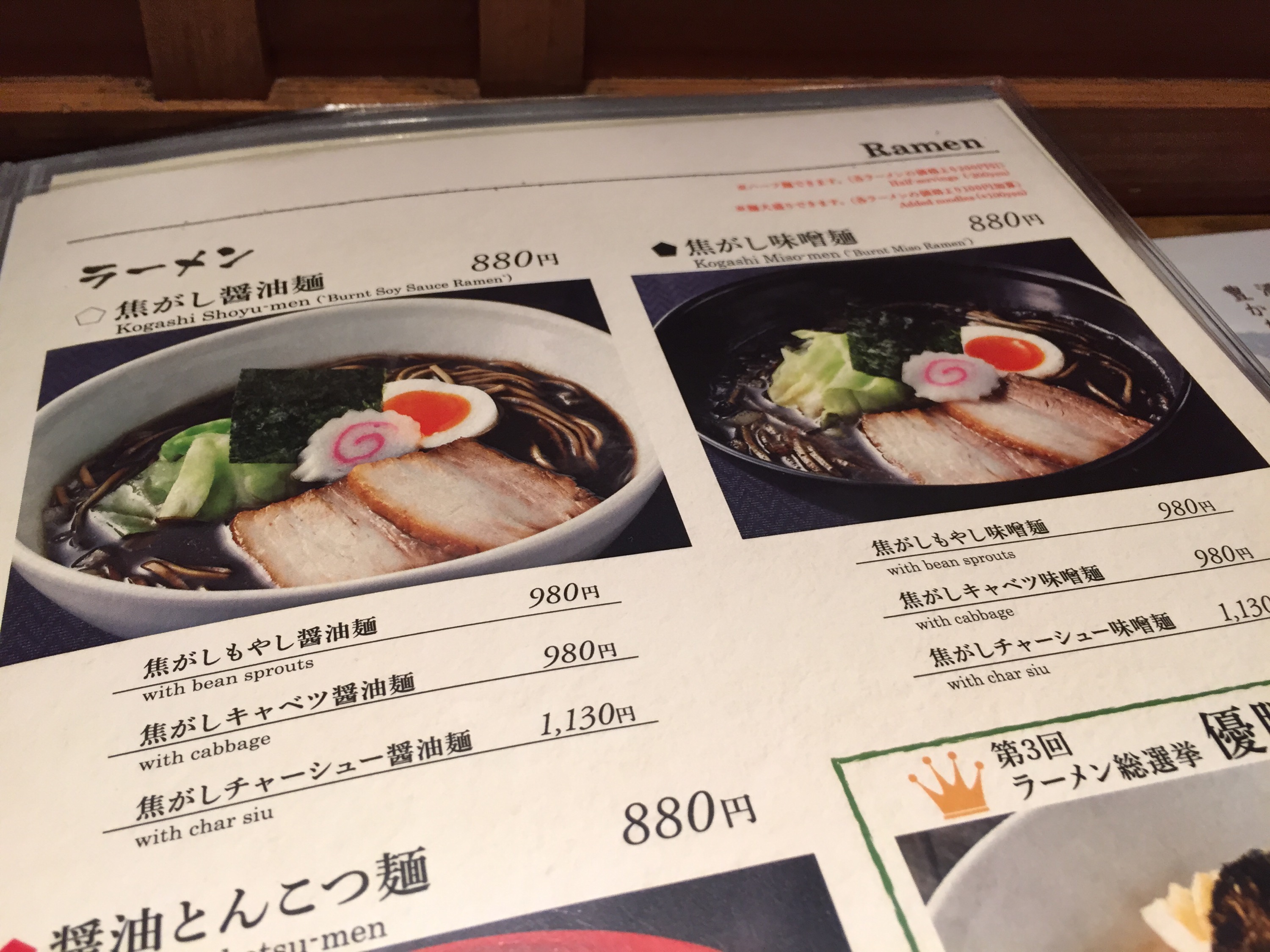 Would we come back if we could? Yes. Are we? Probably not. But if you are in central Kyoto (or apparently Tokyo) area and craving cheap good ramen (880¥), this is your place.