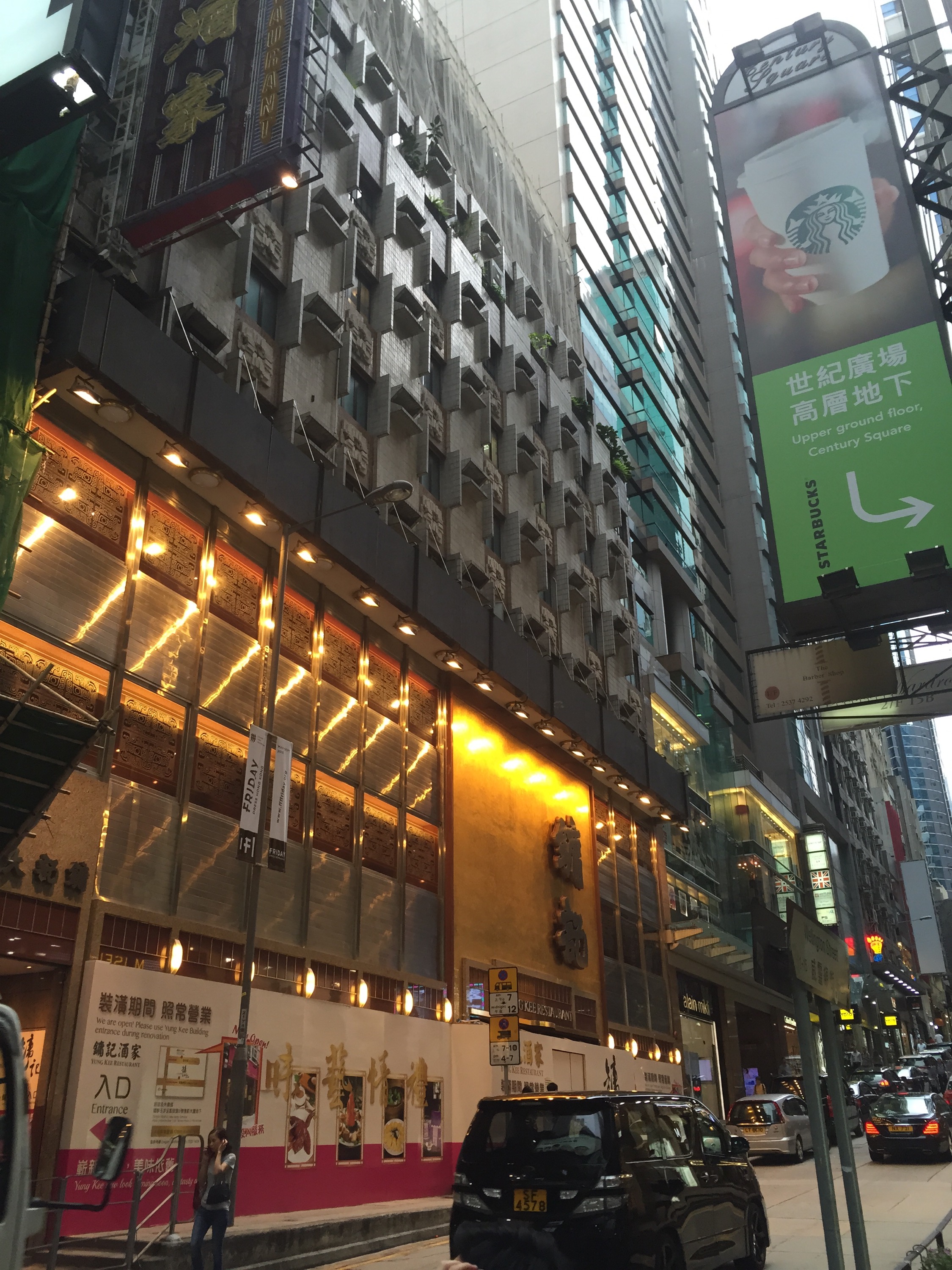 Yung Kee Restaurant, which I raved about 5 years ago, is actually three restaurants in one. This time the ground floor was closed for renovation, and we weren’t dropping the big bucks for the VIP room this time, which put us this time in the middle tier, literally on the second floor. A typical nice Cantonese banquet hall greeted us. 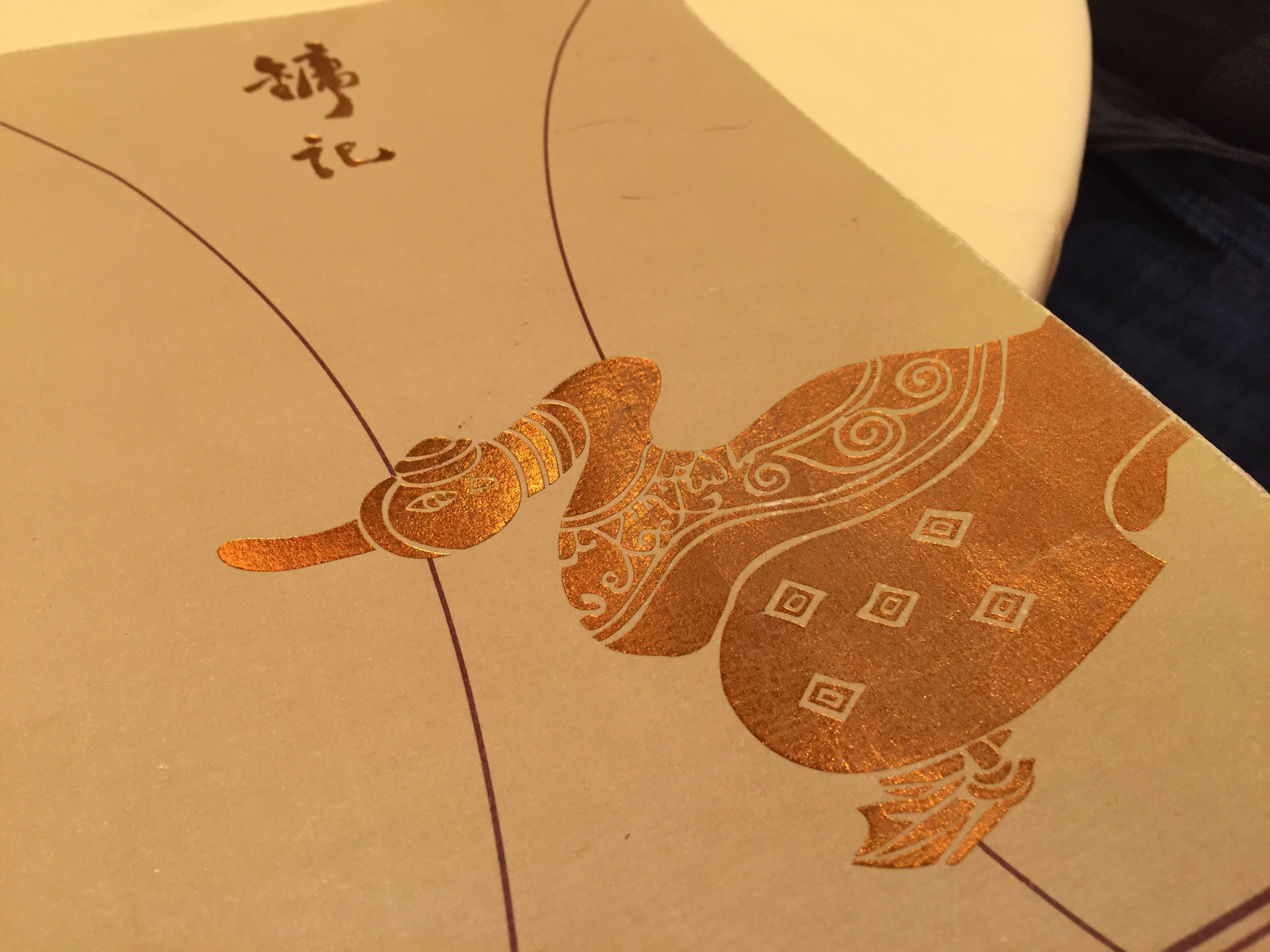 Immediately my in-laws started asking me if I wanted the beef or the pork. Like I would get anything but the goose, the dish that made this place famous and earned the Michelin star. 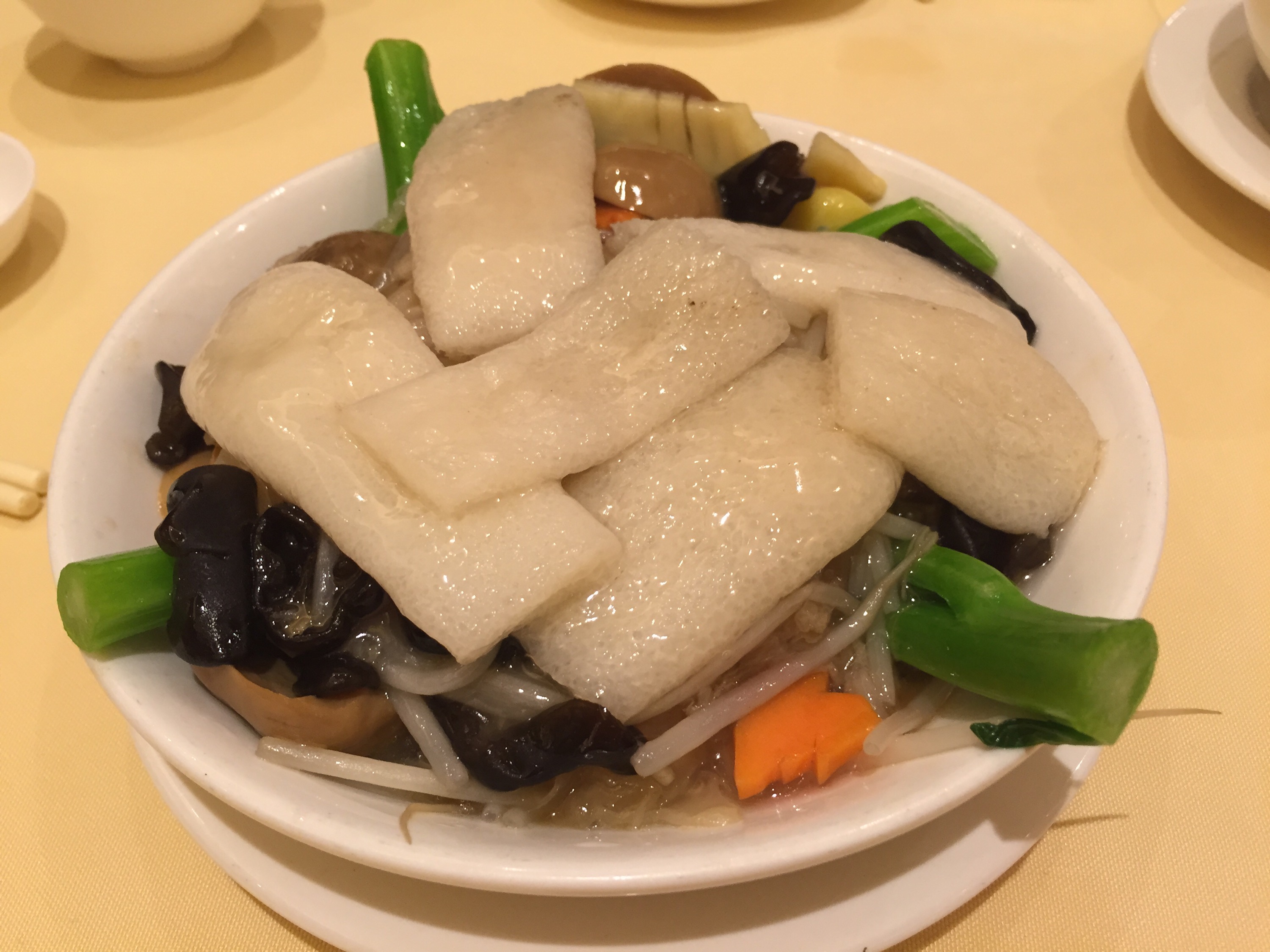 Even though this wasn’t the most formal restaurnt, the presentation was still beautiful. Even dime vegetables with tofu skin, mushrooms, bean sprouts, and ginkgo seeds was presented immaculately. 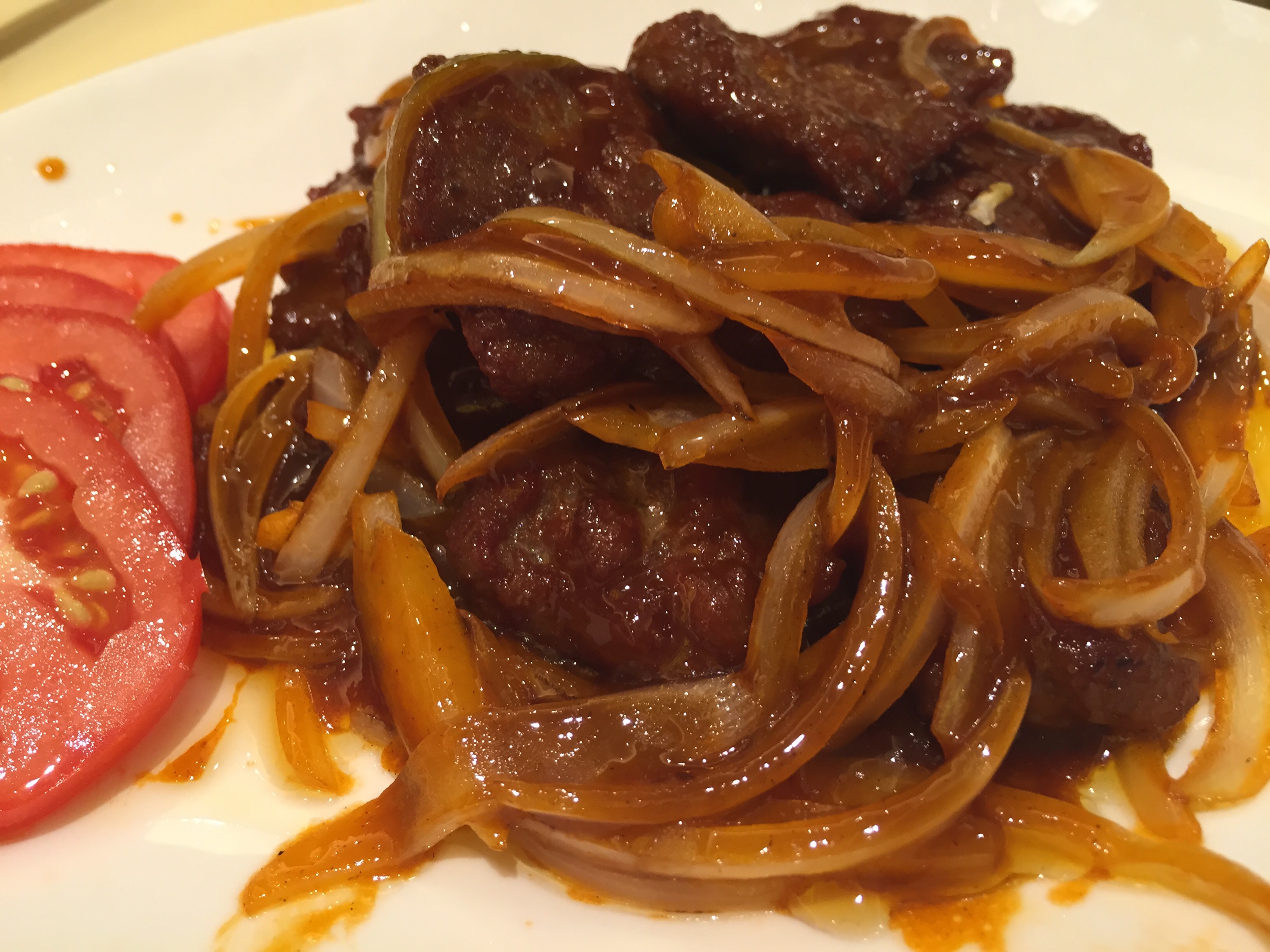 Next, my sister-in-laws’ favorite, a perfectly grilled filet mignonette, sliced thin and stir fired in a sweet sauce with onions. It was sweet, smokey, savory, and the beer amazingly tender.

When our plates were dirtied after the beef, the staff replaced them with clean ones and brought out a beautiful fried rice presented in wrapped leaves. Perfect texture, light flavor, and lots of little chunks of meats and shrip to keep you satiated while we waited for the main event… 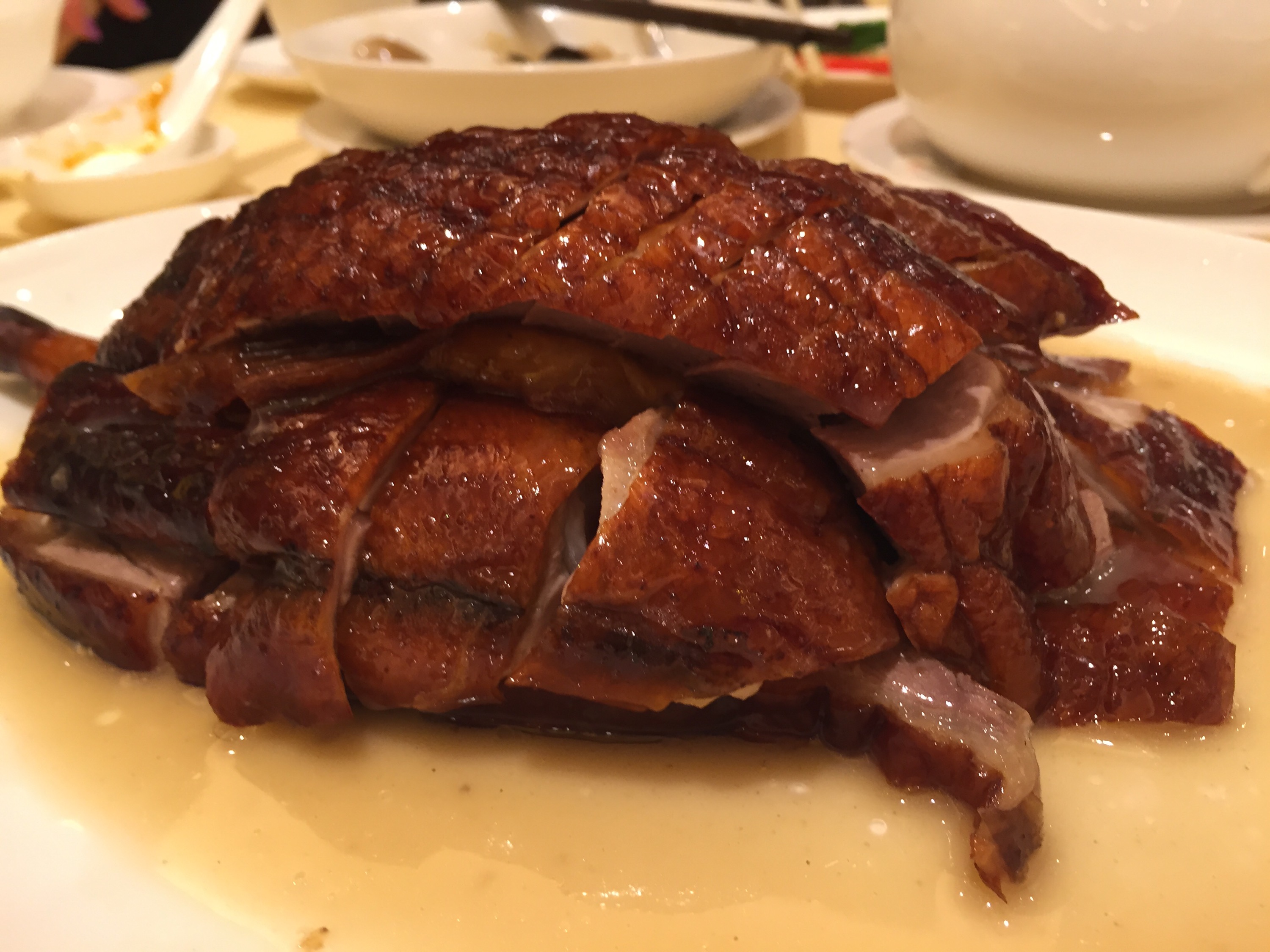 The roast goose – crispy skin, flavorful meat, and not nearly as fatty or oily as duck. This was a total different presentation than the last time we were here. Instead of the Peking duck style wrappers, it was served with a gravy poured over the top, and a sweet tangy ginger sauce on the side. Yet still, this was as delicious as I remember.

So I promised the details on this fantastic banquet we had on our second day. One of the most famous restaurants in Hong Kong is Yung Kee in Central. Renowned for its roast goose recipe, the restaurant now owns the entire 14 floor building that it is located in. It’s even been awarded a star from the Michelin Guide. We had a private room on the more luxurious 4th floor to celebrate the 75th birthday of my wife’s uncle.

Starting off the dinner was the infamous dish, 1000 year egg. Some consider it a delicacy, but apparently it’s a fairly common dish and is frequently used in congee. It had a jelly-like consistency, tasted somewhat like a pickle, and had the most amazing colors to it. My photo doesn’t do the iridescence justice. Apparently it’s made by wrapping a duck egg in clay, soaked with various salts and acids for up to several months. The longer, the better.

Following the egg was a treo of appetizers representing Health, Wealth, and Happiness. First, “money purses”, small pouches of minced pork, wrapped up in a layer of rice dough and boiled. The end result looks surprisingly like a tiny purse or bag that people used to wear on their belts.

The second of the treo was fried sea cucumber stomachs. I had never had sea cucumber before, and was quite surprised. The dish was light and crispy, with a slight ocean taste, but mostly it was like eating french fries.

The third of the set was a traditional dish that apparently is very rare today. Stacked up like coins were pork-fat medallions, duck pate, and water chestnut, slathered in an egg-yolk sauce. It was incredibly delicious, even though I generally dislike patte.

The next dish of the meal is the one the restaurant is famous for. The Roast Goose was prepared in a similar style to Peking Duck. Yes, it was as delicious as it looks.

Following the roast goose was a common delicacy for Chinese banquets, shark fin soup. This was the second time I had shark-fin soup, but a very different preparation from anything I had expected. It came to the table a very vibrant orange, and had a creamy consistency, although I doubt any dairy products were used. Surprisingly, there was no fishy taste to it at all, in fact if I didn’t know better, I would have sworn it was a cheese soup.

The next dish was also seafood, so I wasn’t thrilled when it arrived. Individual stuffed crab claws were then breaded and fried, making for very attractive dishes. Perfect portion size, and the tip of the claw exposed, made these very appealing and memorable. I was pleasantly surprised with the flavor and enjoyed the light chili sauce garnishing each claw when served.

Following the crab claws was the most visually impressive dish of the evening. A huge platter came to the table, arranging several different varieties of eggplant in a light sauce.

The purple chinese eggplant arranged vertically was stuffed with crab meat, and on top was sea cucumber. The photos are deceptive, each of those vertical towers was at least 3 inches tall.

My wife was very jealous, as she’s allergic to eggplant.

Even when portioned out into individual servings, the dish was very beautiful. I have to commend the servers at their plating skills. The techniques over the course of the evening as they split up the large dishes were very antithetical to what I’ve come to expect from Chinese cuisine.

After the eggplant came one final seafood dish, lobster noodles. The noodles were cooked in a lobster broth and were clearly the focus of the dish, even though there was lobster piled on top. Again, the photos are deceptive, as the full dish brought to the table was easily 30 inches across, a veritable mountain of lobster.

Wrapping up the main dishes were a huge plate of noodles (clearly the inspiration for chow mein) and fried rice. These are typical ends to a chinese banquet, allowing people to fill up with the over abundance of food. Considering how stuffed we already were at this point, it was mostly gratuitous, but I tried some anyways. Naturally they were delicious.

That brings us to desert. Since it was a birthday, there was a cake covered in strawberries, and of course, since it was a chinese banquet, we also had the ubiquitous red bean soup and fresh fruit platter.

And finally, the icing on the cake, ( there were mini peaches in the cake decoration), we had Longevity Peaches. However, these aren’t actually fruit; they’re steamed rice buns with a lotus paste and duck egg center. Shaped and colored to resemble peaches, these are a traditional birthday dish. There is a Chinese legend about a monkey who travels to a far-off garden to eat peaches that grant eternal life. Because of this, the peach is a symbol of longevity in Chinese culture, and peaches made from gold are often gifted for long-lived anniversaries or birthdays.

Each of these “baby buts”, as my wife likes to call them, was about the size of my fist, and I have large fists.

That’s it for this banquet. Only the second day of our trip to Hong Kong, and already we’ve shot over 100 pictures just of food. Next time, some local snack and everyday dishes.