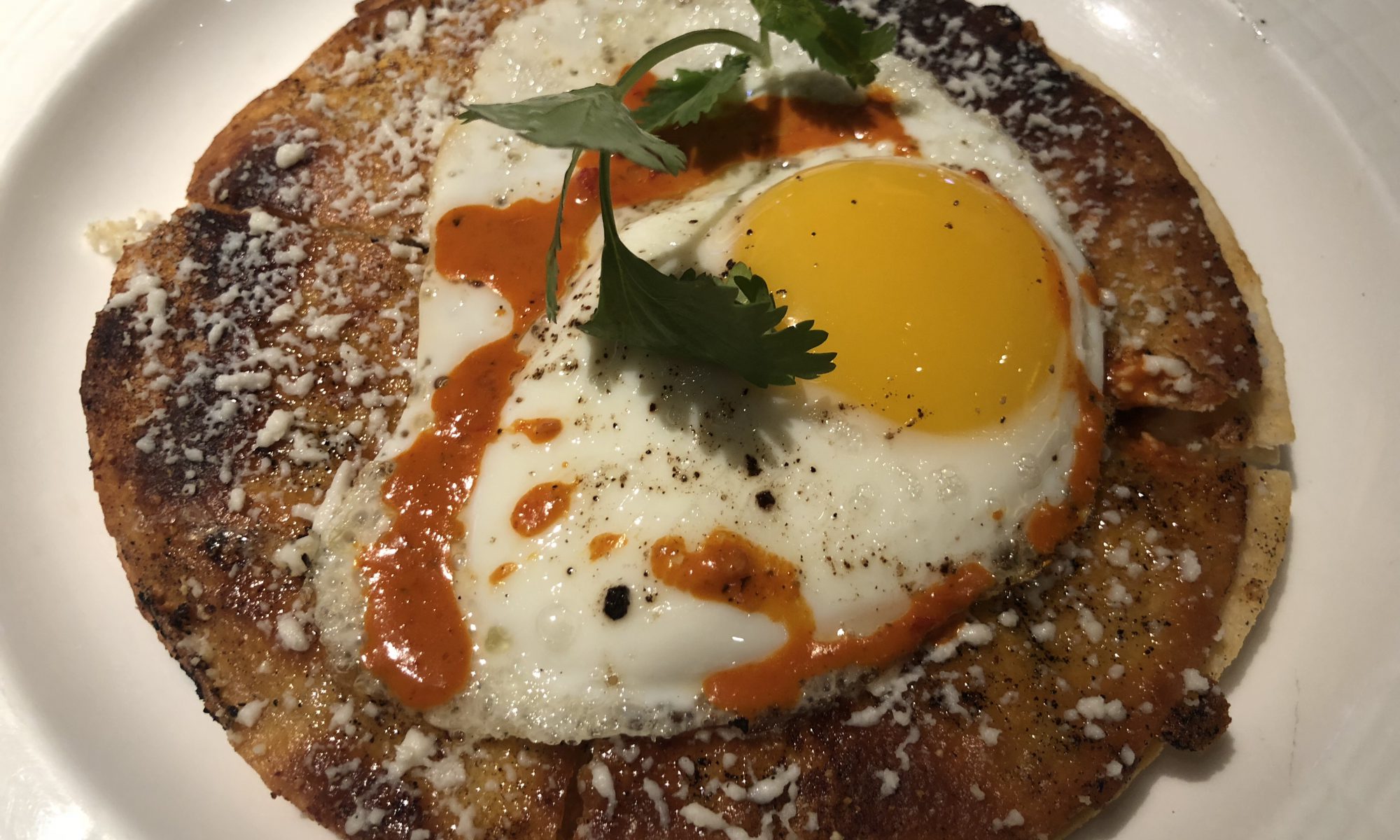 I’m finishing the year 545 miles short of the next frequent flier status tier, which means searching for the cheapest flight I can find to do a mileage run. 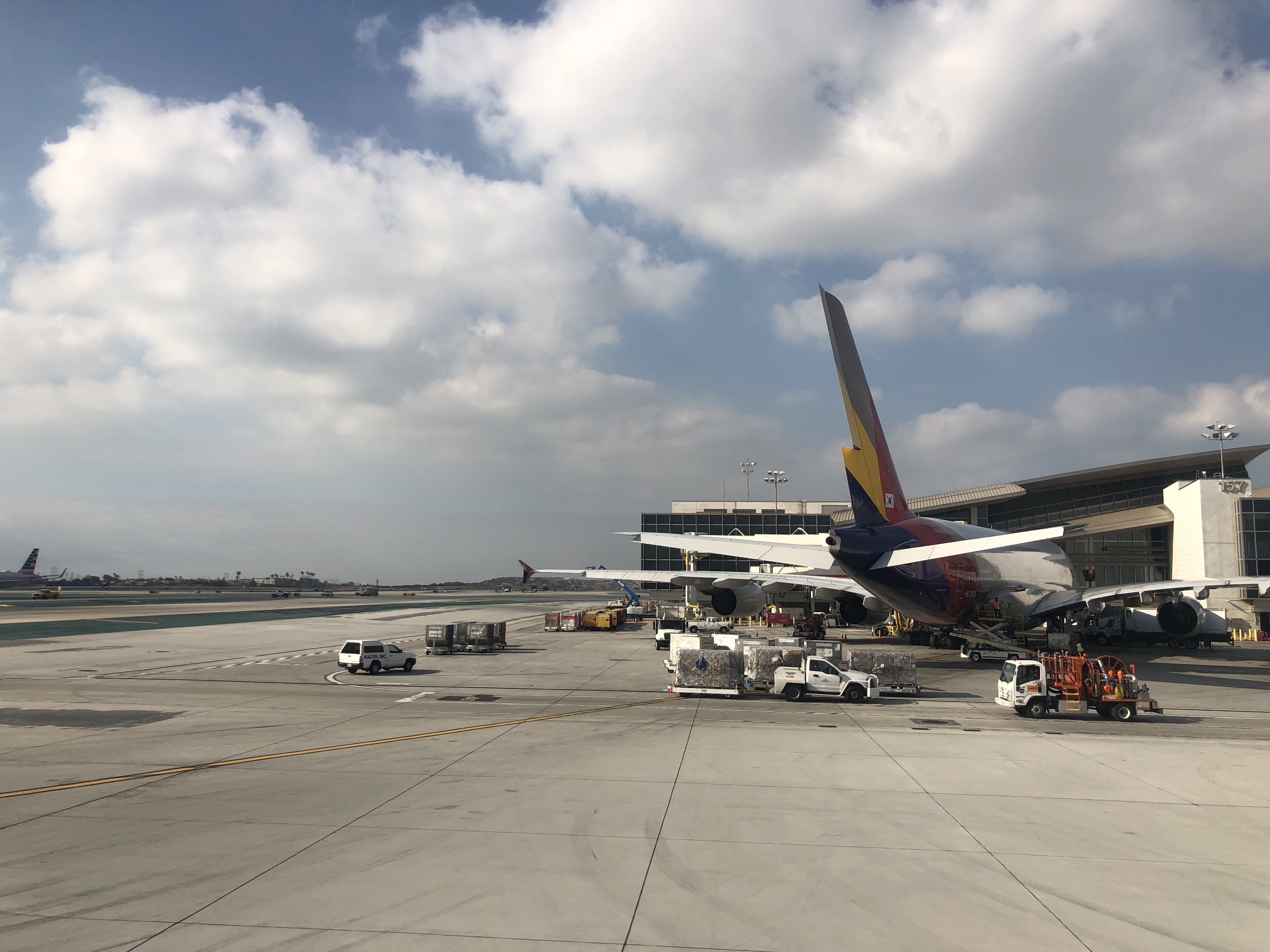 Flying out of LAX that means something in in California or Nevada, and the cheapest same-day turnaround I find is a Wednesday trip to Las Vegas. Because of the timing, it’s going to mean early dinner in the airport rushed in the 45 minutes between landing and return. But if I pay $4 more, I can pick flights that give me a few hours at lunch time in Vegas… which means as a foodie there’s only one thing to do, book reservations at one of the many well-known chef’s establishments scattered throughout this town. Dinner is out of the question due to flight schedules, so I settle for lunch at Mesa Grill, Bobby Flay’s establishment. 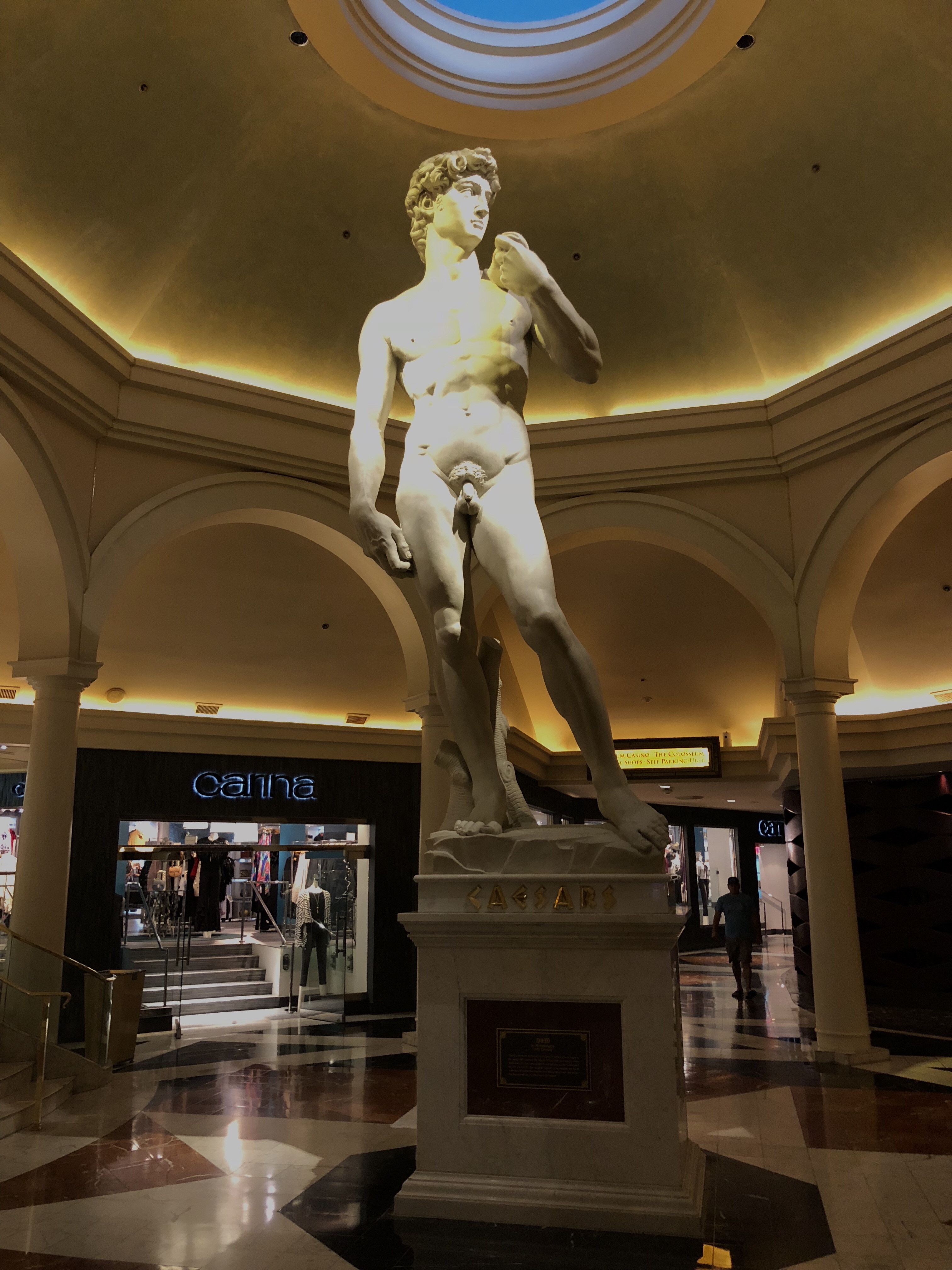 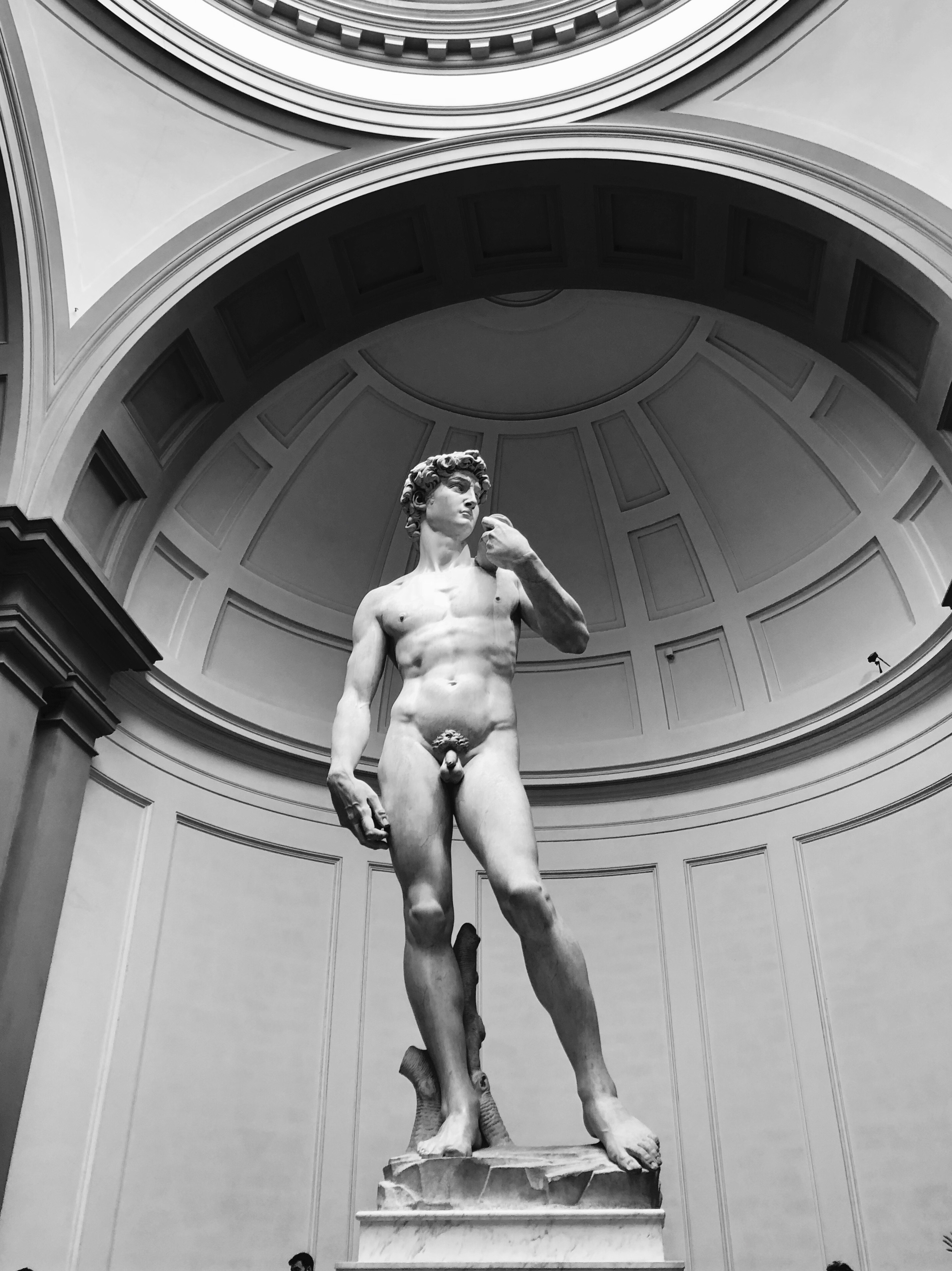 I wander through Caesar’s Palace to kill the time before my reservation, comparing the fake plastics with the real stones of my recent Italy trip. 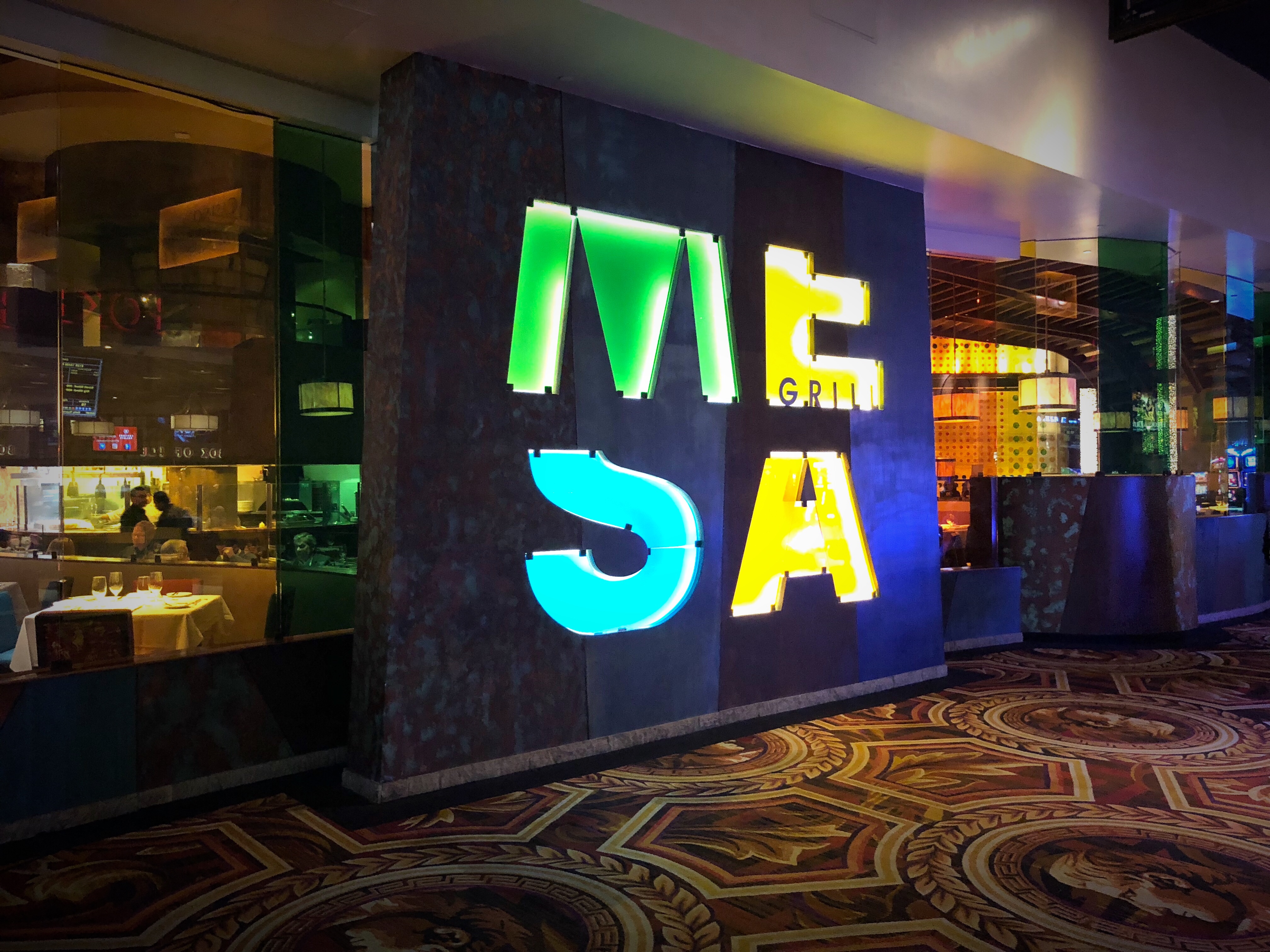 Entering the restaurant smells intoxicating, that mix of grilled meats, melted cheese, and corn tortillas makes an almost overpowering aroma that thankfully blocks out the casino cigarette smoke outside. 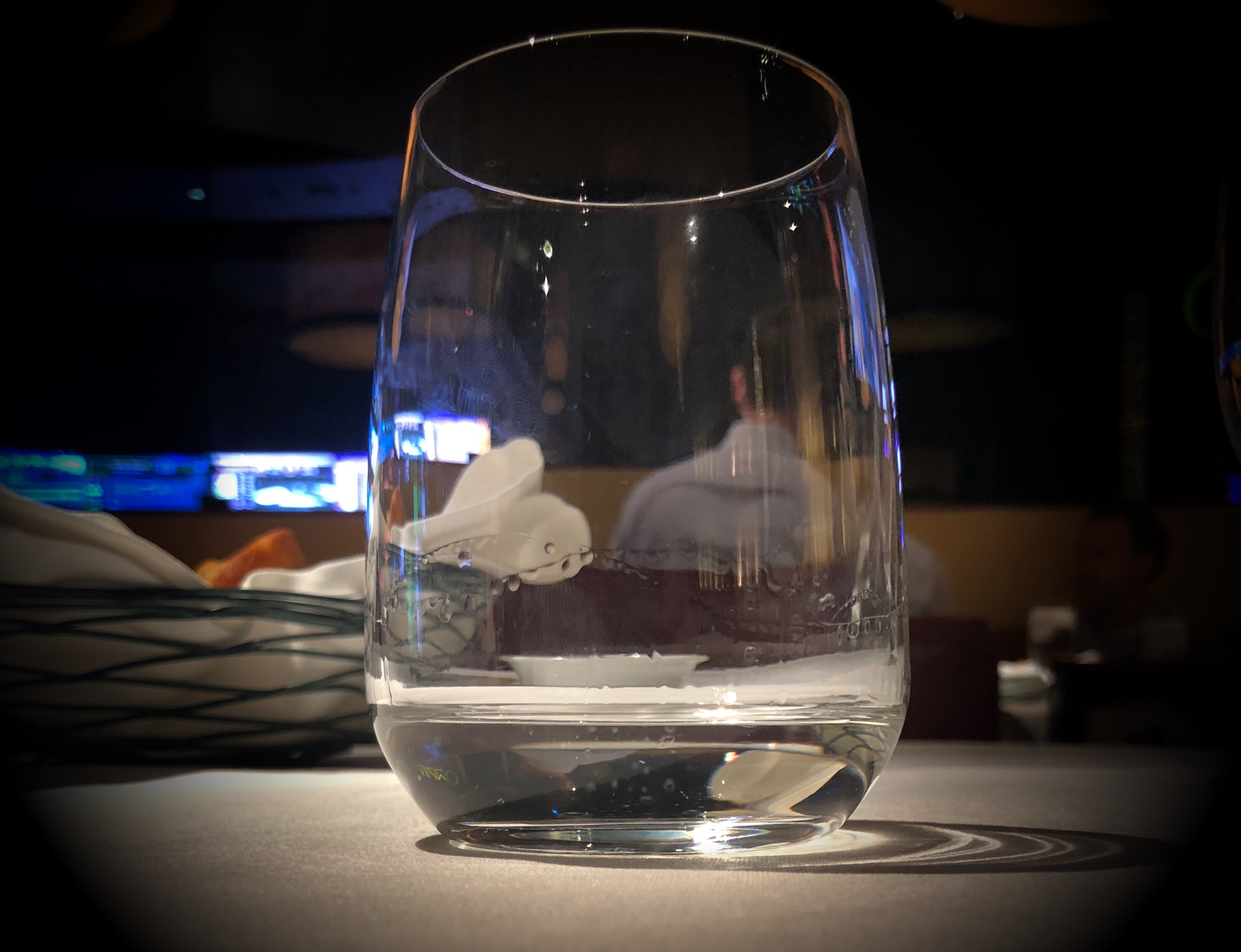 I place my order and enjoy a tequila while I wait. Minero, a single-village tequila from Don Maguey is buttery smooth, clear as water, with a heavy smoke overlaying a crisp citrus with hints of mint. I decide I like it, and that’s not the in-flight scotch talking. 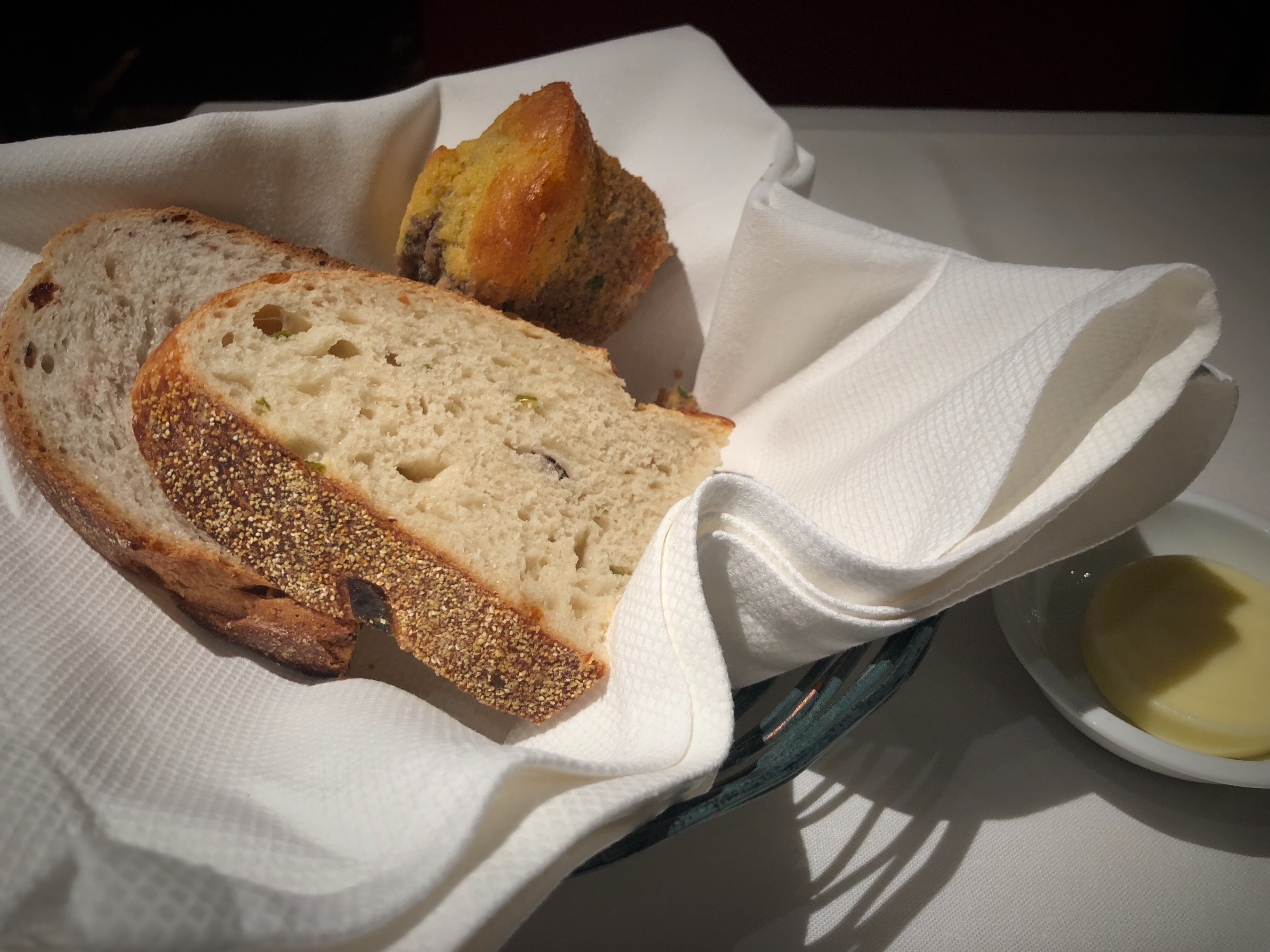 A bread basket appears with jalapeño cornbread, and a raisins and walnuts sourdough. Knowing I won’t be able to eat it all, I try the cornbread which has distinct marbling of blue corn and yellow cornmeal with a nice crispy fried outer texture. Inside is plenty of fresh corn, and two different types of peppers, the sweet Italian canned ones, and smoked green Hatch chiles. 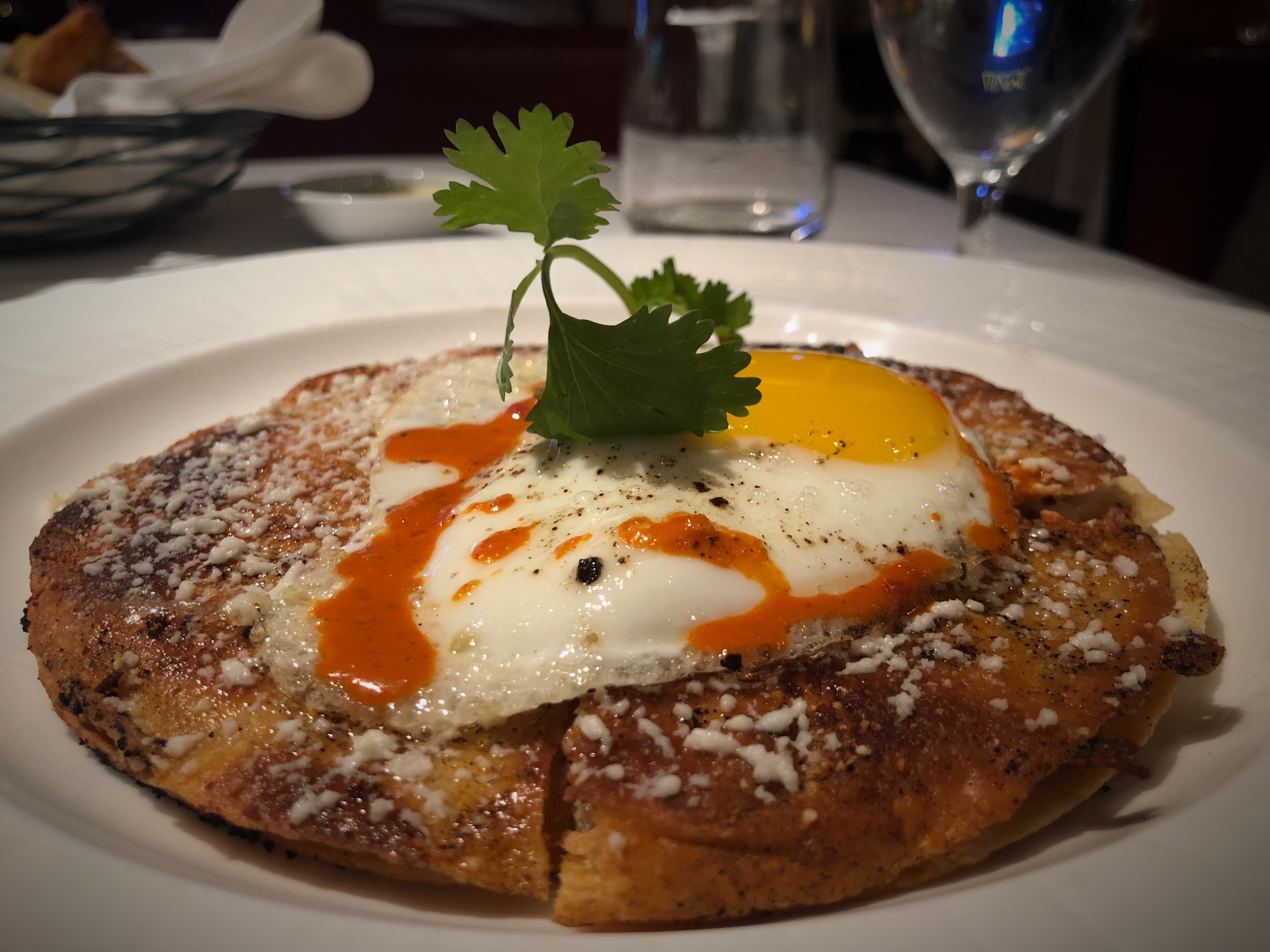 The bacon is juicy and salty on top of the gooey mild white cheese. The tortillas are crisp and slightly delaminating. Topping it is a slightly melted cotija (how did they get it to melt?) a perfectly fried egg, and of course being a Bobby Flay restaurant, a slather of house-made hot sauce. The sauce has a nice kick, and rich vinegary flavors not unlike siracha, but with smokey notes that probably came from grilling the peppers. Overall combination of salt, fat, and smoke pairs fantastically with the tequila, suppressing the alcohol to bring out the citrus. 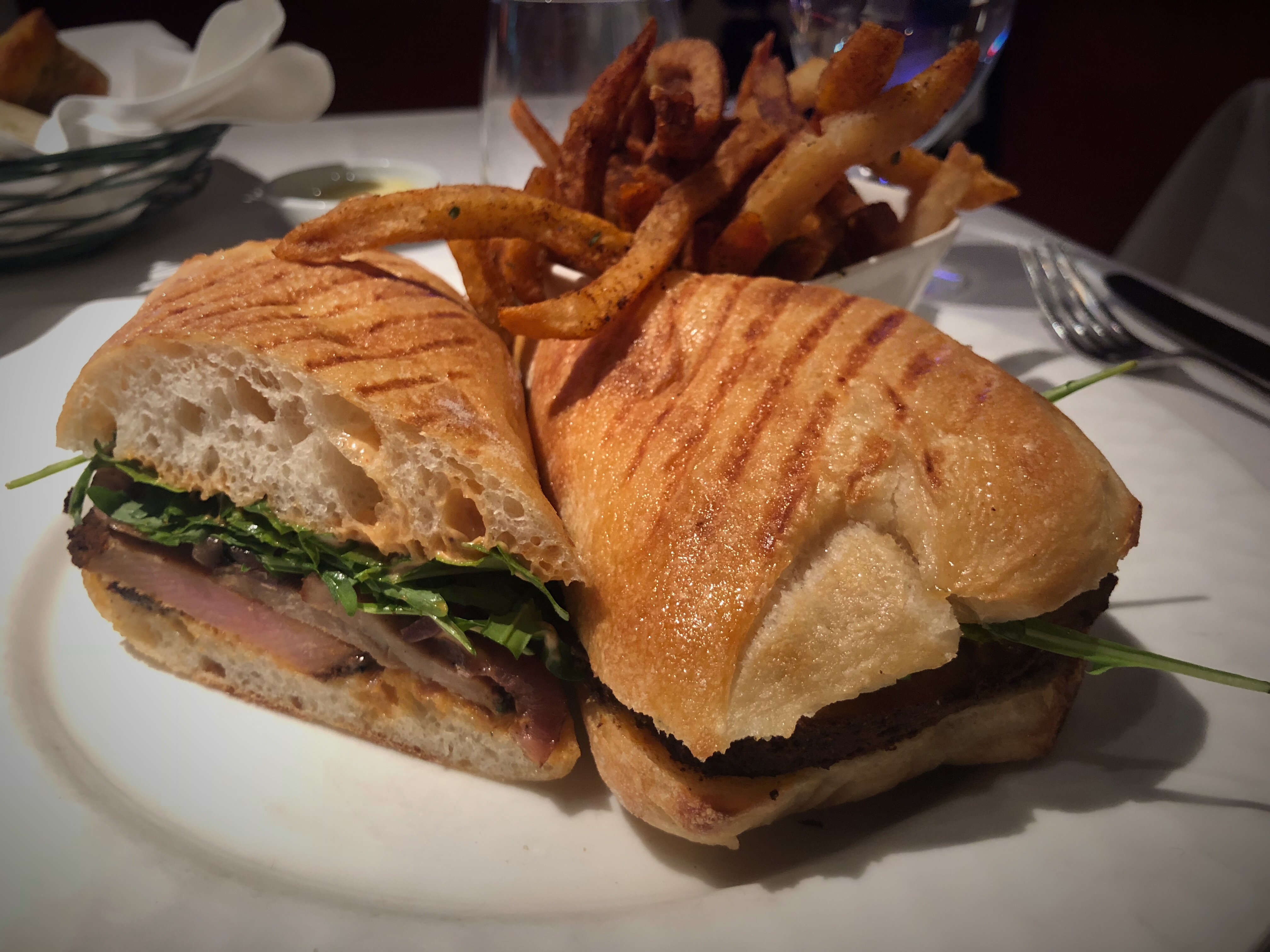 For the main course, I went with the pork sandwich. The grill marks on the oiled bread don’t add much flavor, but they look pretty and reinforce the theme. So let’s start with the pork. 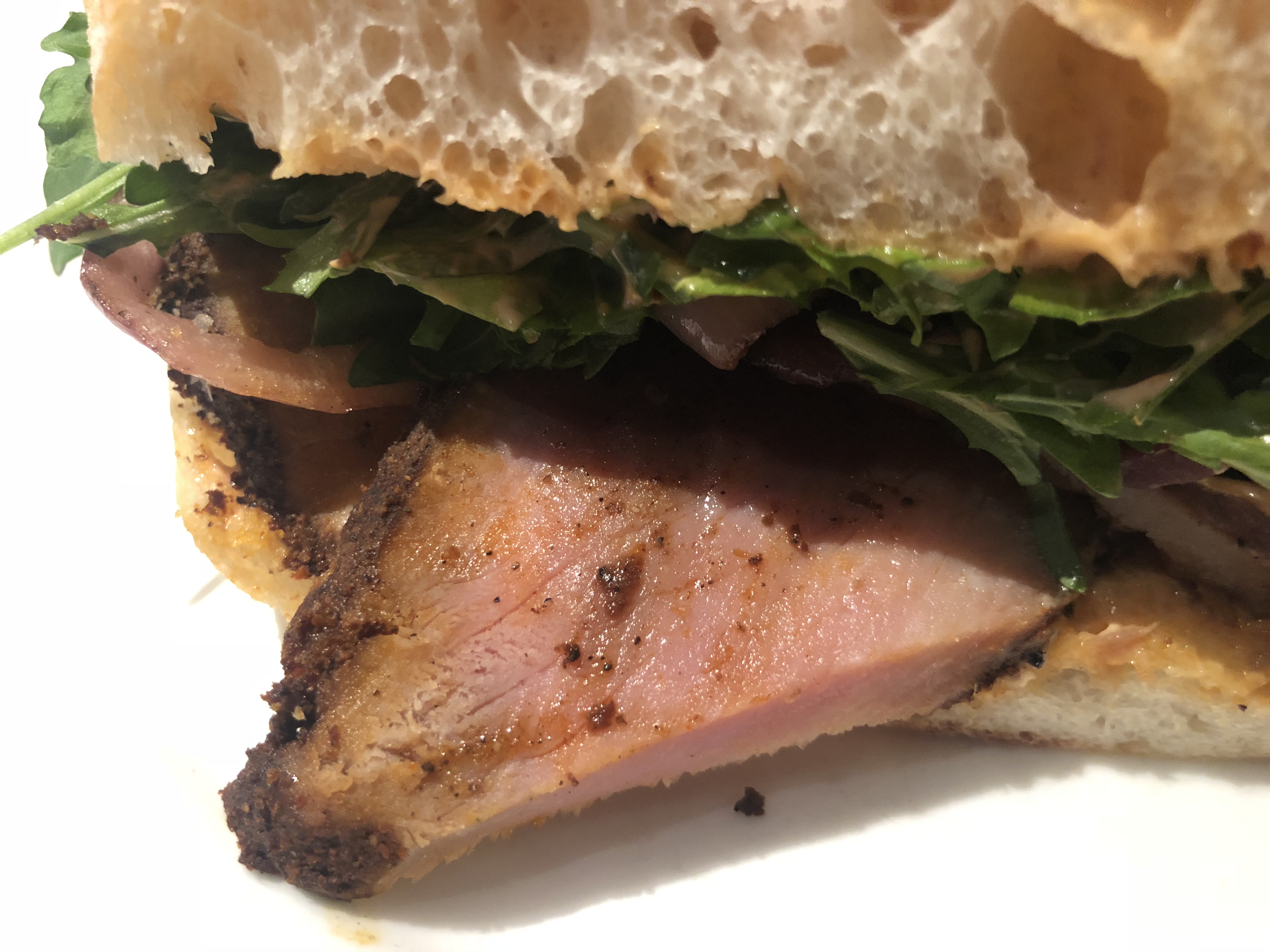 It’s beautifully tender and juicy with a rich spicy red chile dry rub that has as much herbal flavors as it does heat. The smoke has penetrated nicely into the pink meat, blending with the brining that has the distinct flavor of sweet potatoes. Some arugula adds a hint of bitterness, and chargrilled red onions and sweetness. Dressed with a chipotle mayo, the whole sandwich comes together in an explosion of flavors that would rival any steak sandwich I’ve had in the past. Again, the dish pairs nicely with the tequila, this time brining out caramels and spice, but I don’t think it’s as great a match as the quesadilla. On the side is a generous helping of seasoned fries, which are good, but still fries and not the star of the show.

I know how jealous my wife gets, so when I ask the waiter to box up the second half of my sandwich, I also put in an order of the shrimp tamale to go. 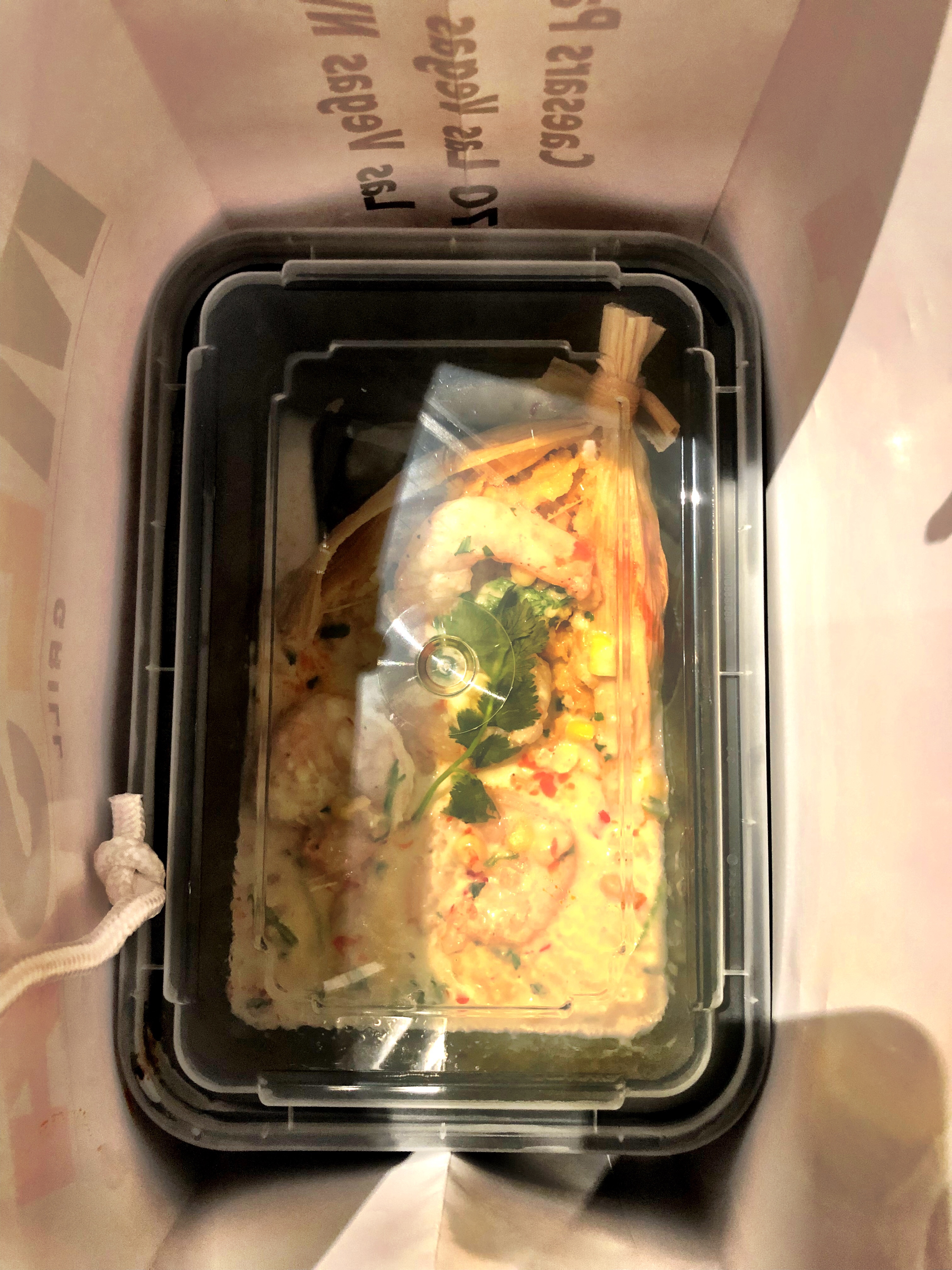 And with that, this short trip comes to an end as I turn around and catch a taxi back to the airport for my return home. 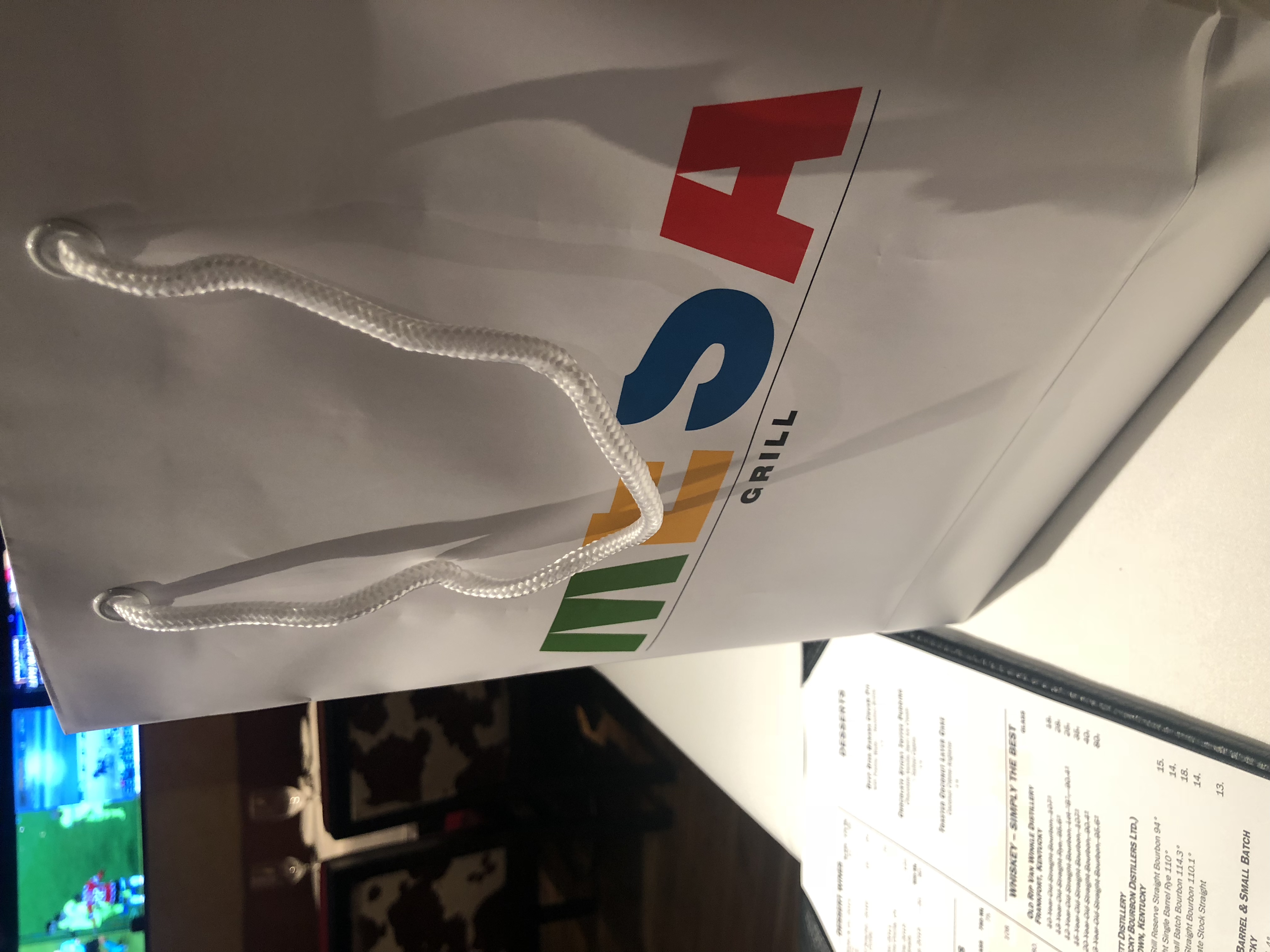 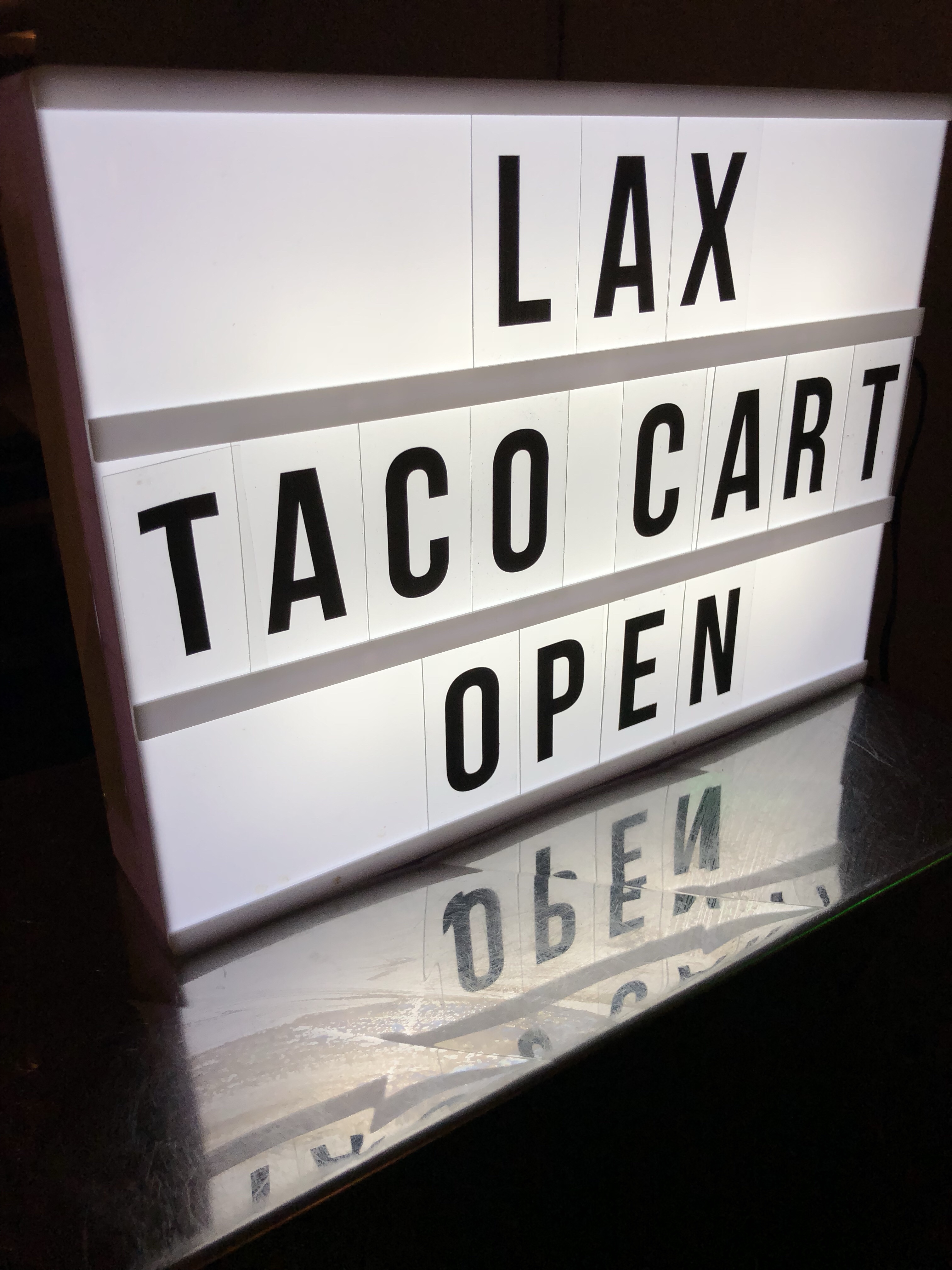 I wait in the OneWorld lounge at the international terminal at LAX (status has its perks) and I can’t help but notice I’m enjoying the food. There’s the expected spread of fruits, some buffet salads and sides, a vegetarian pasta and some kind of Indian chicken dish which is tender and well cooked, but a little boring. Of course there’s all the top-shelf bourbon you can drink.

But what stands out is a quintessential LA treat. They operate a taco stand, inside the lounge! Options are limited, chicken quesadillas and beef tacos, but hey, this beats a generic burger or dry grilled chicken breast. I grabbed two tacos. Sadly, the cart is freestanding so the tortillas aren’t freshly grilled, and to appeal to the bland international traveler’s expectations, they use flour instead of corn. But the meat is well seasoned and very tender. Topped with a black bean and corn salsa, some slaw, a hit of sour cream, and several shakes of chipotle tabasco and you’re served up with the closest thing to “real” Mexican food that you’re likely to find inside the sterile confines of the airport terminal. 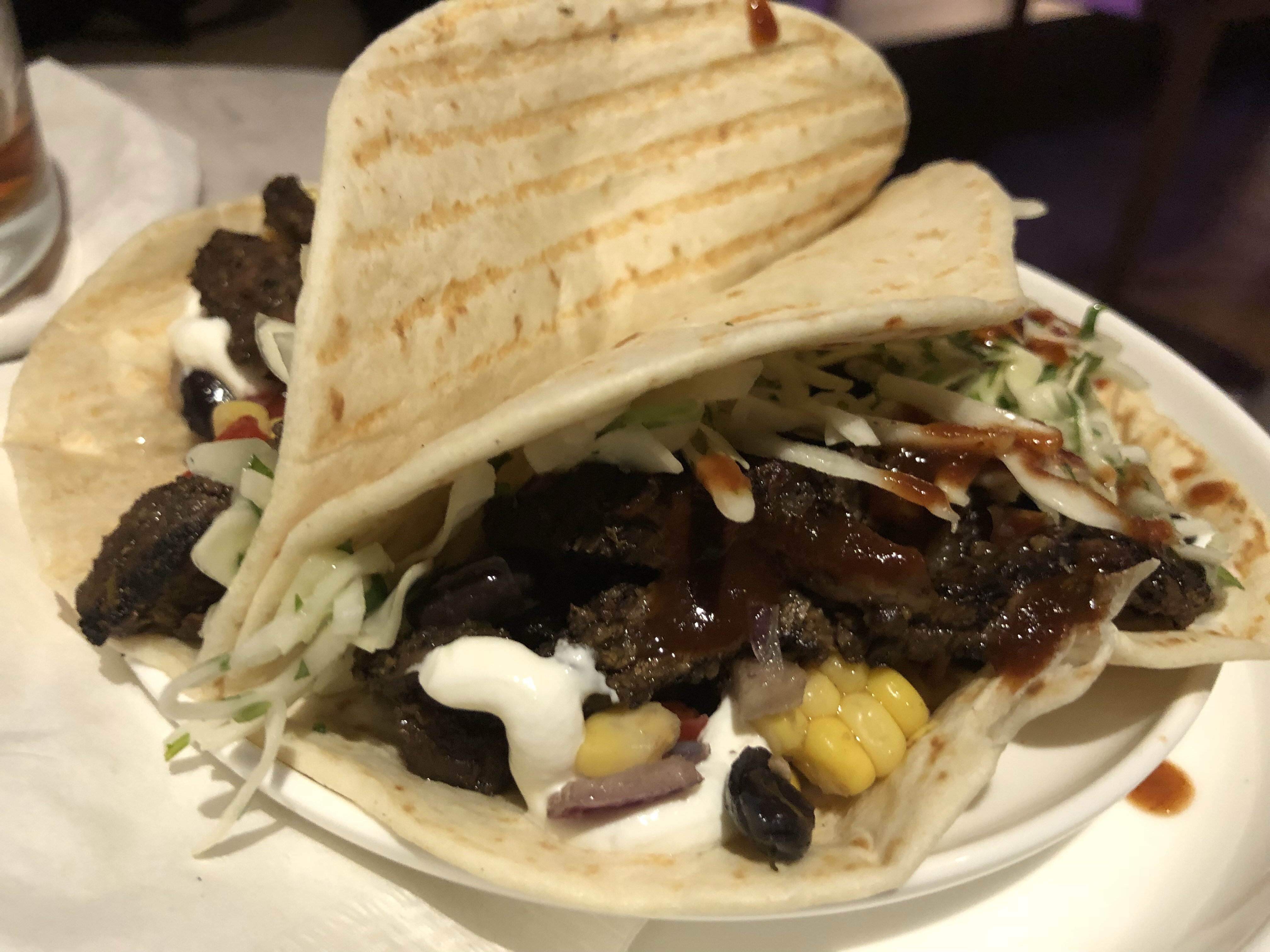